A protest at by EFF at an old age home in Pretoria turned tense in a fiery stand-off between residents, and the EFF. 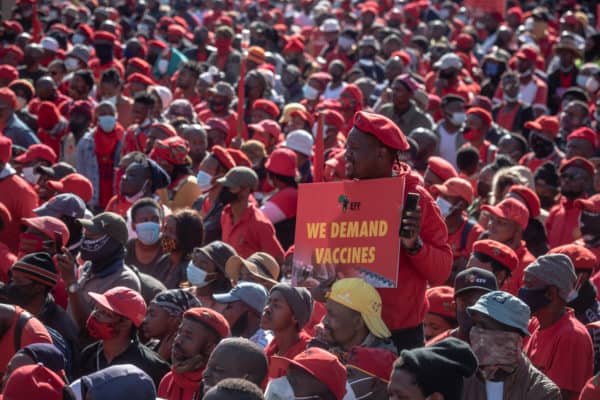 A protest at an old age home in Pretoria turned tense on Wednesday following a fiery stand-off between residents, an Afrikaner nationalist group and the EFF.

Around 100 members of the EFF marched to the Huis Herfsblaar retirement home in Queenswood to protest over what it called racism and unfair labour practices.

While the EFF were marching, a number of residents and members of the Afrikaner group, Bittereinders (to the bitter end), led by pop singer Steve Hofmeyr’s son, Devon, gathered outside an open field adjacent to the old age home. As the EFF arrived, the residents and Bittereinders formed a barricade in the middle of the road just past the old age home.

The EFF, who were not obstructed by the group at the gates of the old age home, then decided that they would walk through the community blockade.

ALSO READ: I want to retire from politics at the age of 55 – Malema

A line of police officers stood between the two groups as insults, some of which were racial, were hurled at one another. Both groups also made threats of violence.

After the tense stand-off, the EFF moved back to Huis Herfsblaar, where they delivered a memorandum of demands.

However, they warned that they would walk through the blockade. “If they don’t move, we push. Let the blood come down,” said the EFF’s Obakeng Ramabodu.

The EFF accused the old age home of unfair discrimination, including that black workers were passed up for promotions, compelled to speak Afrikaans, and have less annual leave than their white counterparts.

Huis Herfsblaar had earlier in the month obtained an interdict against some of the unions for the unlawful strike action. The old age home accepted the memorandum.

Comment from the home, regarding the allegations, will be added once received.

After the memorandum was handed over, the EFF wanted to make good on their promise that they would march through the community blockade. Because their buses were between the blockade and the old age home, EFF members instructed the drivers to park on the other side of the blockade. Police, who had a heavy presence at the protest, were seen speaking to the community and the Afrikaner group, explaining that the EFF was going to march through.

The group initially refused to disperse, adamant that they would stand their ground to protect the community. They argued that some of the members were armed, and that they refused to be provoked by the EFF.

However, as the EFF members got closer, the residents gave way, but continued to walk beside the EFF towards the buses. There was another tense stand-off near the buses, where police had to intervene. Eventually, both groups dispersed without any violence breaking out, but not before exchanging more insults.

Malema promises electricity and houses, implies the ANC doesn't care for its people
5 days ago
5 days ago

Malema promises electricity and houses, implies the ANC doesn't care for its people
5 days ago
5 days ago