Do not provoke our members, SANDF warns public

The department released a statement condemning such behaviour and commended its member for keeping composure. 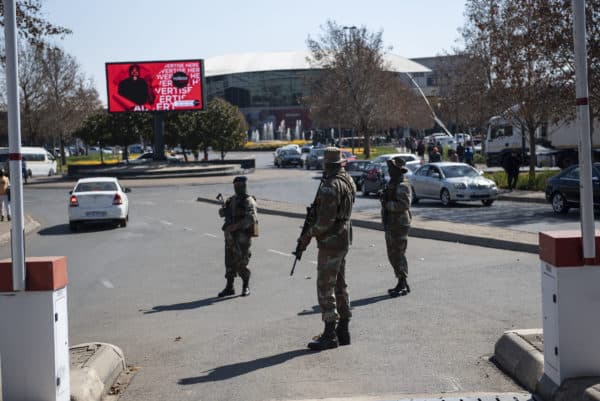 Members of the SANDF are seen at Maponya Mall, 20 July 2021, after the mall re-opened for business following mass looting and riots last week which took place at various shopping centres around Soweto. Maponya Mall was unaffected by the looting. Picture: Michel Bega

This after a video making rounds on social media shows a taxi driver accosting a member of the SANDF who was on patrol duty in Pietermaritzburg KwaZulu-Natal.

On Wednesday, the defence force released a statement condemning such behaviour and commended its member for keeping composure.

“It is concerning to note a few social media comments commending this act of provocation,” the department said.

“Such contempt disregard and disrespect of law enforcement officer should be condemned with the contempt its deserves by all law-abiding citizens.”

“The public is urged to refrain from committing acts of provocation or incitement against members of the SANDF.”

“It is an illegal and prosecutable offence to interfere with any law enforcement official on duty regardless of the circumstances.”

“The SANDF remains resolute and committed to its mandate to safeguard the territorial integrity and sovereignty of the republic and that does not extend to unleashing brute force or violence against citizens.”

At least 25,000 troops have been deployed to KZN and Gauteng to help quell the violence.