WATCH: Traffic officer to be investigated after he’s filmed swearing at woman in shop 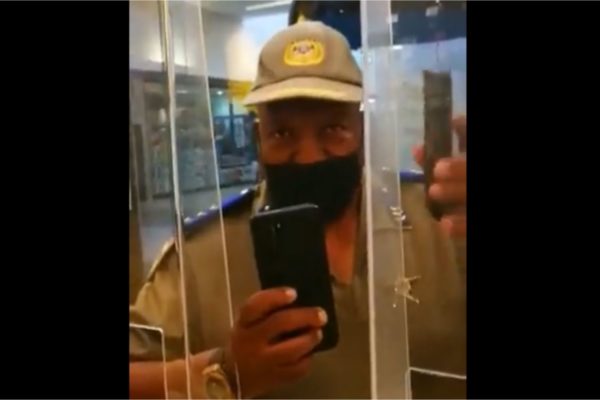 A Gauteng traffic officer is being investigated after he was filmed insulting an employee in a cellphone store. Picture: Screenshot from Twitter

Gauteng Traffic Police say they will investigate a senior Gauteng traffic officer after he was caught on camera insulting and swearing at an employee in a cellphone store in Heidelberg.

It’s unclear how the war of words started but a video doing the rounds on social media shows the official having an angry exchange with a woman behind the counter at the shop.

In the video, the woman can be heard asking the man, who is a chief provincial inspector, to repeat himself.

“Say it again … So, you tell people that they are bitches and sluts?” she says.

While filming the incident on his own phone, the officer tells the woman that he is a customer and that she’ll lose her job.

The officer, dressed in his traffic police uniform, then tells the woman she is “f***ing stupid”.

“You think you’re smart? You must go to school… You’re f***ing stupid,” he can be heard saying.

The officer then appears to try to grab the employee’s cellphone from her hands.

Gauteng traffic police spokesperson Sello Maremane has since said that the officer is being investigated.

“The Gauteng Traffic Police wishes to state categorically that this incident will be fully investigated, and we are appealing to the store official to come forth and give us a statement detailing the circumstances and events which led to the argument,” said Maremane.

“Law enforcement officers are expected to conduct themselves in an exemplary manner which is in consistent with the code of conduct even when confronted with challenges.”

Maremane added that Gauteng Traffic Police is “deeply concerned by the unpleasant remarks”.

“No law-enforcement official has a right to abuse community members regardless of their status in society and even with slightest provocation,” he added.