Solidarity’s list of people with technical skills to help at Eskom is already at more than 1,000 names. 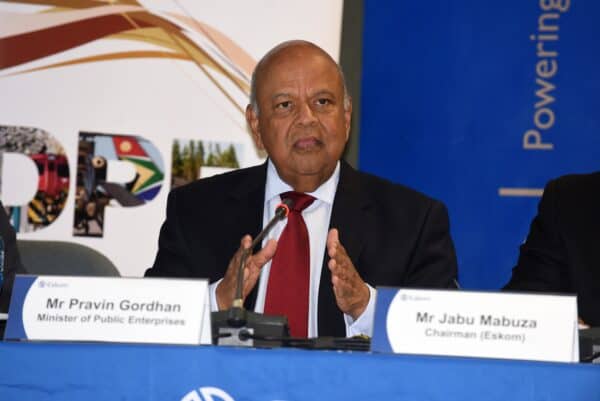 Public Enterprises minister Pravin Gordhan during the Eskom media briefing about the state of electricity in the country at the Lethabo Power Plant on 3 April 2019 in Free State. Picture: Gallo Images/Business Day/Freddy Mavunda

Gordhan only responded this week, as load shedding continued to cripple the economy.

In a letter addressed to Solidarity’s Dirk Hermann, which Solidarity made public this week, Gordhan thanked the union for the offer of assistance for Eskom’s “generation performance challenges”.

Gordhan added: “Due to the extreme urgency required from Eskom, can you provide the list of names of engineers and technical experts that can be deployed to Eskom.”

One of the criticisms of the performance over Eskom over the past 20 years is that the power utility has allowed skilled and experienced power generations experts to leave the corporation, either through retrenchments or retirement.

In most cases, these people have been replaced by those with lower qualifications or less experience – or both.

In his letter to Gordhan in May, following the minister’s budget speech, Hermann wrote that Eskom’s plan to radically transform the power utility had not only cost taxpayers R1.8 billion, but had also “reduced Eskom’s engineering and technical skills base”.

Hermann tweeted that Solidarity had the “names of hundreds of experts” to help resolve the Eskom crisis, but he noted, “if the government is really prepared to receive help”.

There have been reports Solidarity has been swamped over the past two weeks with offers from people who want to generate electricity privately to feed into the national grid to help in the crisis – but who have been unable to obtain the necessary permits from government.

“In most cases, those skilled, yet retrenched, Eskom employees, who are also South African citizens, are still available to render services to Eskom, when or if required,” Herman said in his letter to Gordhan.

“The issue here is thus not a lack of engineering and technical skills, but the radical transformation programme which has been implemented in the past, and which still applies to this day.”

Hermann noted Solidarity had previously offered assistance with the redeployment of skilled and experienced engineering and technical South Africans to assist with the challenge at Eskom, “and we hereby wish to do so once again”.

Solidarity’s list of people with technical skills to help at Eskom is already at more than 1,000 names.