Meanwhile, there is still no sign of kidnapped baby Kwahlelwa Tiwane. 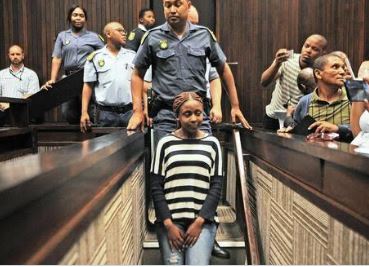 The steely reserve that Karabo Tau has shown since her arrest for the alleged kidnapping of a baby melted on Wednesday when she clung tightly to her family and sobbed deeply outside the Bellville Magistrate’s Court, after being released on bail.

Magistrate Charles Scott pronounced that the State had not shown it was in the interests of justice to keep the 18-year-old matric pupil in custody any longer, and granted bail of R2,000.

Inside the court there were barely suppressed sighs of relief and quiet incantations of “thank you!”.

Earlier, in a different court room, kidnap charges were withdrawn against her co-accused Ely Kibunda, and the family’s lawyer Leon Fieties is considering launching a civil claim for his alleged wrongful arrest.

Outside the court, opposing groups for and against Tau sang out “Voetsek F*kof“, and altered lines of the protest song to: ” Myeke Karabo” (Leave our Karabo alone) and “Sinikeni Karabo” (Give us Karabo).

Her family and supporters believe she is innocent, while the other group wants to know where the twin baby Kwahlela Tiwane is.

SAPS officials and traffic police cordoned off the road outside the court and separated the two groups, some of whom had brought golf putting irons with them.

One stone was lobbed down the blocked-off road outside the court, but after a brief verbal skirmish the opposing groups were separated and taxis took them home.

Little Kwahlelwa was allegedly kidnapped in Parow. Police stated in their alert for the baby that his mother Asanda had travelled from Khayelitsha with a woman purporting to be a social worker, with the expectation that she would be helped to access social services and she would get money for food. The babies’ birth had not been registered because she was having problems with her ID.

When they got to Parow the woman, who Tiwane testified fits Tau’s description, disappeared with the baby on January 16.

Her lawyer Sulaiman Chotia submitted during the drawn-out bail application that Tau had an alibi – she was in isiXhosa class at Claremont High School at 14.00pm – the estimated time Tau was supposed to have journeyed from Khayelitsha to Parow with the baby and his mother.

The State questioned a letter and CCTV footage provided by the school, and the testimony of her isiXhosa teacher and the IT manager, and alleged that their evidence had been fabricated.

At one point prosecutor Tobinceba Matrose questioned how Tau could remain so calm in court under such intense pressure. During her cross-examination she had put up a fight as she insisted she was innocent and had never met Tiwane before. At the time she said that there was no point in crying because it would not make people believe she is innocent.

But once she was released and bundled into the arms of people sitting in the back of an old model Toyota Corolla, gone were the playful waves into the gallery, and blown kisses.

Scott said that ordinarily he would not hand down judgment on the bail application so quickly, but due to delays caused by a weighty court roll, and load shedding, he did not want to keep Tau in suspense any longer.

He set April 7 as the return date for the case, and said because of her school commitments she would only have to come after 14.00pm.