The piece of land is situated near the Grasmere Toll Plaza in the south of Johannesburg. 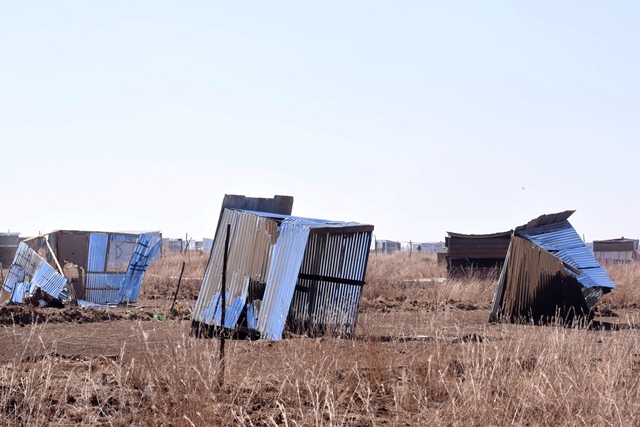 Picture for illustration. Ennerdale residents vandalised new shacks in Lakeview and blocked roads leading into parts of Ennerdale, Zakarriyya Park and Lenasia South in Johannesburg, 19 July 2019, against the land invasions in the areas. Picture: Nigel Sibanda

Midvaal municipality has approached the South Gauteng High Court in Johannesburg to remove a group of people who have illegally occupied a piece of land in Elandsfontein.

The piece of land is situated near the Grasmere Toll Plaza in the south of Johannesburg.

Member of the Mayoral Committee for Community Safety and Human Settlements Mokete Motsamai said they approached the high court on an urgent basis on Wednesday.

Motsamai said the occupations started on 7 June, which forced property owners in Elandsfontein to obtain a court order on 19 June.

“The court order obtained by private properties is covering about six properties. There is a need for us to protect the entire area. Johannesburg Metro Police Department officers have tried to assist us and the situation is at a point where they can’t deal anymore.

“There are still invasions taking place now. Property owners are complaining that the invaders are now forcefully taking portions of their yards. We don’t allow land invasions because they will later protest, demanding services.

“We have established that the invaders are not from Midvaal. We have our own backlog, which is compromising what we are dealing with. It is criminal activity and we won’t tolerate it,” said Motsamai.

Police spokesperson Captain Mavela Masondo said police were called to the area to ensure there was no violence, as the municipality and property owners were demolishing shacks illegally erected in Elandsfontein.