The NSPCA feels the lenient sentencing of Dr Elfreda Alberts is a travesty of justice. The pain was visible on the monkey’s face, and she was humanly euthanised shortly after being discovered, by Dr Katja Koeppel at the Johannesburg Zoo. Photo: Supplied

Warning: This article includes images and information which may be upsetting to some readers.

It has taken court authorities eight years to prosecute a veterinarian for fatally maiming a female vervet monkey, and still, uncertainty remains.

Dr Elfreda Alberts was found guilty of animal cruelty in the form of maiming, neglect, and the failure to administer pain medication, obstruction, and the legal possession of an indigenous wild animal in the Nigel Magistrate’s Court on 4 March, with her sentencing handed down in November.

In total, Alberts was sentenced to a fine of R10 750 or six and a half months imprisonment, suspended for three years – a sentence, the NSPCA said, is disturbingly lenient. Alberts handed in an application to be acquitted of all charges.

The NSPCA voiced its concerns about the sentence last week, saying: “The heinous nature of the crime ought to have been reflected in the sentence to deter others…

“We hoped that the accused would have been granted denial of ownership of animals so that she may never be in possession of an animal and therefore may not cause it harm,” said NSPA wildlife protection unit national inspector, Nicole Venter.

“The court made their decision based on the accused’s age and the likelihood of her reputation as a vet not recovering,” Venter said.

According to the NSPCA, the saga originated in October 2012, after it received a complaint about the dogs on the vet’s property.

Upon further inspection, investigators found a small monkey dragging itself around Alberts’ bedroom with her only remaining limb. All her other limbs had been amputated, and she had a deep incision across her abdomen. The monkey was euthanised shortly after being discovered. 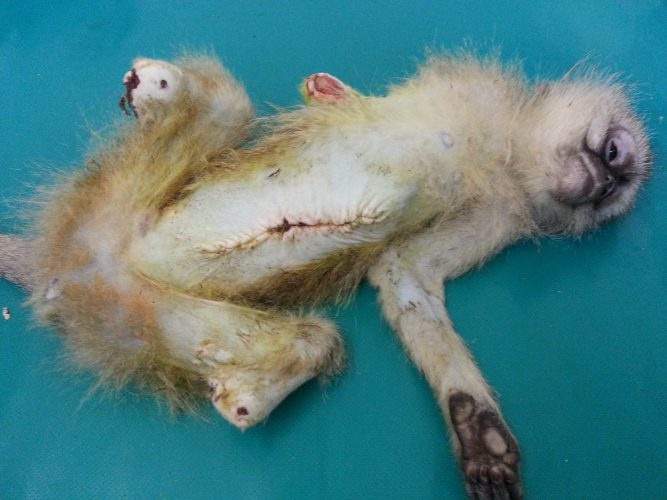 The female vervet monkey had three of her four limbs amputated, and had an incision across her abdomen, for reasons unknown. She was maimed by Dr Elfreda Alberts. Photo: Supplied

Since 2012, the case has seen a series of delays, both from Alberts, her legal representatives, Nigel court prosecutors and the South African Veterinary Council (SAVC), but after intervention from the National Prosecuting Authority, merit was found in forging ahead with the case.

But even after Alberts’ sentencing, uncertainty remains and Venter said that the NSPCA is awaiting further instruction from the SAVC, who she said is “awaiting for judgement to take further action”.

“Of course, judgement was passed on months ago, but we have yet to hear what the final decision from the SAVC is.”

SAVC investigation committee chairperson Glen Carlisle said that at this stage, the case has not yet been discussed.

He confirmed that a meeting with the investigation committee will be taking place on Tuesday morning, but that there is “no conclusion on that at all”.

The NSPCA remains unmoved, saying it will not give up in seeing justice, despite the appeal: “The NSPCA will continue pursuing this case on an ongoing basis until the very end.”