Ndlovu is alleged to have received more than R1.4 million in insurance payouts. 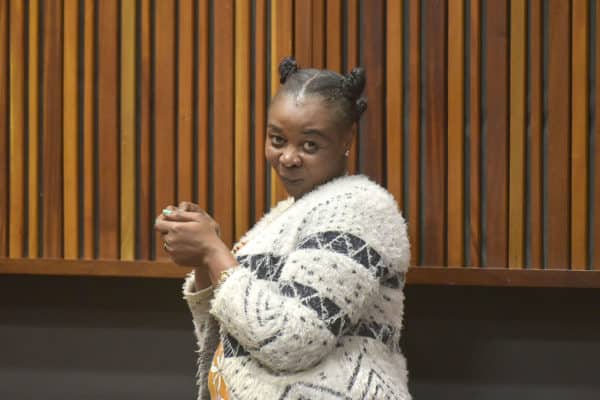 Former police officer Nomia Rosemary Ndlovu on Wednesday returned to the High Court sitting in Palm Ridge for the resumption of her murder trial.

Ndlovu made headlines this week after a video of her planning the murder of her family members with two hitmen went viral on social media.

She is accused of plotting to kill her sister and her sister’s five children in Bushbuckridge, Mpumalanga, so that she could cash in on insurance and funeral policy payouts. She was arrested after the alleged hitmen told police about her plot to murder her relatives.

Ndlovu is alleged to have received more than R1.4 million in insurance payouts.

The former cop, who was attached to the Tembisa police station in Gauteng, faces several charges of murder and defeating the ends of justice linked to the deaths of five of her relatives and boyfriend.

On Tuesday, Ndlovu testified in the trial and pleaded not guilty to the charges against her.

WATCH: Rosemary Ndlovu back in the dock, courtesy of eNCA

Joyce Ndlovu, her children and their elderly grandmother were the lucky ones who survived her sister Ndlovu’s alleged killing spree, which the state says started in April 2012 with the murder of her cousin, Madaka Homu.

Homu’s body was found in a bush with blunt force trauma, with Ndlovu allegedly pocketing R131,339.70 in insurance money.

Next to die was her sister Audrey, who Nomia is alleged to have poisoned on 25 June 2013 and strangled the following day when she returned to find her still alive.

According to the 56-page prosecution case, Ndlovu collected a total of R717,421.70 in insurance money from her sister’s death.

In October 2015, the body of Ndlovu’s partner Yingwani Mabasa was found with multiple sharp and blunt force head injuries near Olifantsfontein police station in Ekurhuleni.

Ndlovu collected R416,357.84 in insurance money, according to the state’s case.

On 13 June 2016, Ndlovu’s niece Zanele Motha was attacked in Bredel, Kempton Park, and treated for head injuries at Tembisa Hospital.

She was discharged to her aunt, Naomi, the next day but was declared dead on arrival at Arwyp Hospital in Kempton Park.

According to the evidence before the court, Ndlovu collected a total of R119,840.00 in insurance money from her niece’s death. In April 2017, the body of Mayeni Mashaba was found along Delmas Road with a gunshot wound to the head.

According to the cellphone records part of prosecution evidence, Ndlovu was in the company of the deceased prior to his death.

In January 2018, the body of Ndlovu’s nephew Brilliant Mashego – the son of Nomia’s murdered sister Audrey – was found near the Dwarsloop marketplace in Bushbuckridge, Mpumalanga.

Prior to his death, according to the indictment, Mashego had questioned his aunt about the money she received from his mother’s death.