Mkhwebane opposes Mabuyane’s application to have graft report set aside

According to the public protector's report, Mabuyane 'improperly benefited from the misuse of public funds'. 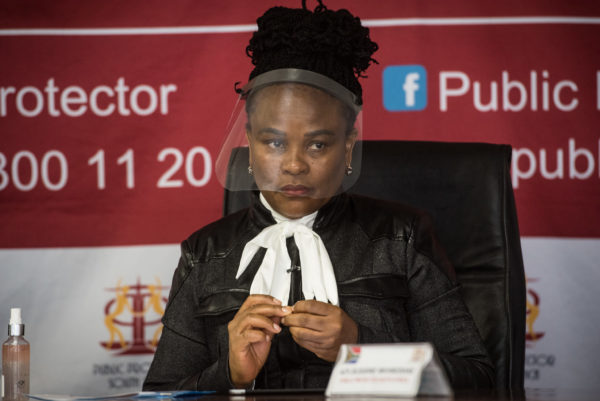 Public Protector Busisiwe Mkhwebane is opposing Eastern Cape Premier Oscar Mabuyane’s application which seeks to have her report reviewed and set aside.

Part A and B of Mabuyane’s application

Mail & Guardian reported that Mabuyane, in a two-part application, approached the Bhisho High Court last Friday to challenge Mkhwebane’s findings against him.

In part A of his application, the premier seeks an order to interdict the implementation of the remedial action that was recommended by Mkhwebane in her report “pending the finalisation of the relief sought in part B”.

Part B of Mabuyane’s application seeks to have Mkhwebane’s report reviewed and set aside.

The premier has argued that the conclusions made by the public protector were “irrational, arbitrary and in conflict with evidence”.

Mkhwebane, meanwhile, has since submitted responding affidavits with the high court on Tuesday.

In her papers, Mkhwebane has indicated that she will not oppose part A of the premier’s application, saying she will abide by the high court’s decision.

Mkhwebane’s spokesperson, Oupa Segalwe, explained that the public protector won’t do so because “the office will not suffer any prejudice if the relief sought is granted”.

Selgwe said, however, that the Office of the Public Protector would oppose part B of the application.

Mkhwebane’s report concluded that Mabuyane and public works MEC Babalo Madikizela, including the provincial ANC, “improperly benefited from the misuse of public funds” from a R1.1 million tender set aside to transport mourners to Mbizana in 2018 to a memorial service for Madikizela-Mandela.

The public protector found that Mabuyane, who was the MEC for economic development in 2018, personally benefited to the tune of R450,000, and the money was apparently used to fund renovations at his home.

Mkhwebane also recommended – as a remedial action – that the Hawks investigate the matter further.

She investigated the matter following a complaint from Buffalo City Metropolitan Municipality resident, Xolile Mashukuca, according to News24.

The Economic Freedom Fighters (EFF) in the Eastern Cape have since open a criminal case against Mabuyane and the MEC.

Mabuyane’s application against the public protector comes after the premier had filed separate papers against the Directorate for Priority Crime Investigation (DPCI), also known as the Hawks, in the same court to interdict the unit’s investigation into him.

The premier, in his papers, asked the high court for an order setting aside the decision to launch an investigation into the “unspecified allegations” against him.

He also wants the court to compel the Hawks to provide him with all the information they have against him.

The Hawks have already indicated that they will oppose Mabuyane’s interdict application.

This is after Hawks conducted an investigation that concluded in March this year, having initially started in May 2019., according to the unit’s head Godfrey Lebeya.

The probe looked into the allegations of corruption and fraud within the Eastern Cape provincial government, which were the same allegations that the public protector referred to in her report about Mabuyane.

Lebeya indicated that the case had already been referred to the National Prosecuting Authority (NPA) for prosecution.

However, the NPA has disputed this, claiming the Hawks are still investigating the matter.

The Citizen had reached out to the NPA after reports speculated that the authority had been dragging its feet to prosecute Mabuyane.

As of October, it has been five months since the Hawks claimed to have handed over the docket to the NPA.