The matter was postponed to 25 May 2022 for the accused to secure legal services from Legal Aid. 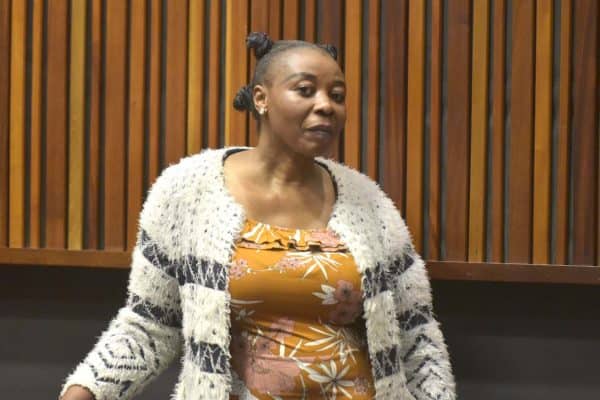 Ndlovu and her co-accused Nomsa Mudau, a former cop who is currently heavily pregnant, made a brief appearance at the Kempton Park Magistrate’s Court on two counts of attempted murder and conspiracy to murder.

The charges relate to an alleged murder plot back in 2018 to murder two police officers, Colonel Nthipe Boloka and Seargeant Benneth Mabunda.

Mabunda was the investigating officer in Ndlovu’s murder case related to her conviction for plotting the murder of five of her relatives and lover for insurance and funeral policy payouts.

Boloka was reportedly the station commander of Norkem Park Police Station where Ndlovu used to work.

Ndlovu and Mudau are facing charges of conspiracy to murder in connection with a plot to kill Justice Mudau, Mudau’s ex-husband, for insurance payouts.

The murder plot was unsuccessful after the hitmen they allegedly hired warned him.

Mudau recently finalised her divorce in November 2021 and the court was informed that she was due to give birth this month.

During court proceedings on Wednesday, Ndlovu told the court that she did not know why she was in court and was only told on Tuesday that she would be making an appearance.

The matter was postponed to 25 May 2022 for the accused to secure legal services from Legal Aid.

Ndlovu remains behind bars while Mudau is out on warning.

In November last year, Ndlovu was sentenced to life in prison for murder by the Johannesburg High Court, sitting in the Palm Ridge Magistrates Court.

This after she was found guilty of six counts of murder, four counts of fraud, defeating the ends of justice and attempted murder for killing five of her relatives and her lover for insurance and funeral policy payouts.

She was arrested in March 2018 after the hitmen she hired to kill her sister and her sister’s five children in Bushbuckridge, Mpumalanga, tipped off police about the murder plot.

Ndlovu was sentenced to life in prison, 25 years for each of the six murders she was found guilty of as well as: