The heist happened around 15.00pm on the N4 West Highway near Bronkhorstspruit, towards Pretoria, on Tuesday afternoon. 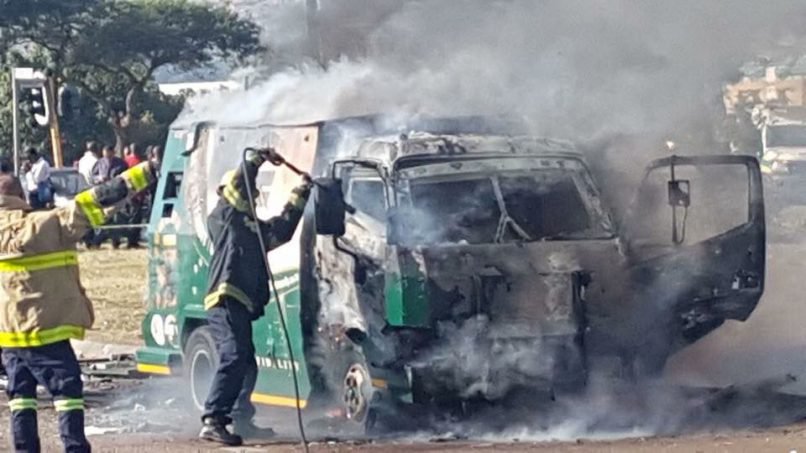 Photo for illustrative purposes. The aftermath of a CIT heist.

A R1m reward is being offered to anyone with information which will lead to the arrest of suspects who robbed a cash-in-transit van on Tuesday afternoon, SBV Services has said.

The heist happened around 15.00pm on the N4 West Highway near Bronkhorstspruit, towards Pretoria.

According to a statement by SBV, an unknown number of suspects fled with an undisclosed amount of cash, without injuring any of its employees.

“As a responsible corporate citizen, SBV thoroughly investigates all incidents. SBV does not tolerate any violence, crime and threats to our human lives.

“We will tirelessly persist in our efforts to mitigate cash-in-transit crime and, together with the authorities and the CIT industry, we will ensure that the perpetrators involved in CIT attacks are brought to justice,” CEO Mark Barrett said.

Police spokesperson Colonel Brenda Muridili said four SBV officials had been forcefully taken out of the vehicle after it was rammed off the road by a car, before being bombed by the gang who were armed with rifles.

“The suspects drove off in three vehicles, while the one they used to ram the cash van was left burning. No injuries were reported and the suspects are still at large,” she said.

SBV has appealed to the public to contact its Early Warning Robbery Hotline which operates 24 hours.

All information would be kept confidential, it said.

“This line is active 24/7 and members of the public may contact 083 408 7029 to provide information to SBV’s investigations team.”

SBV’s Risk & Compliance team was also working closely with the police to investigate the incident.

The company added that details of the incident could not be disclosed while the investigation was under way.