Department of Correctional Services spokesperson Singabakho Nxumalo said the inmates were demanding cigarettes and to be speedily taken to court. 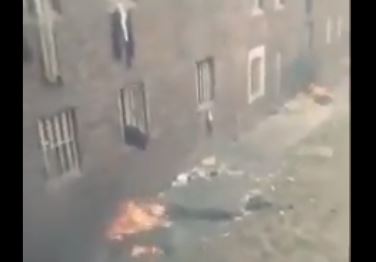 Inmates at St Albans prison in Port Elizabeth set fire to matresses and other objects over slow court dates and a lack of cigarettes, 5 May 2020. Picture: Screengrab from Twitter video

Videos of the inmates setting alight what appears to be clothing and bedding and tossing them out of prison windows were doing the rounds on social media on Tuesday.

Riot: Inmates at the St Albans Prison say they are fed-up with the treatment. A kitchen was set-on fire also this week. @DOJCD_ZA Video as received. pic.twitter.com/DtGA0rtkv2

Called for comment, Department of Correctional Services spokesperson Singabakho Nxumalo said the inmates were demanding cigarettes and to be speedily taken to court.

On Tuesday, the rioting took place amid allegations by inmates that they were being piled up on top of each other inside overcrowded cells due to delays in court appearances, among other things.

Frustrated by the situation, prisoners set fire to objects, demanding to be released.

Nxumalo however denied the overcrowding allegations.

“It is impossible to have people piling up on top of each other. Inmates are demanding that they be taken to courts and be given cigarettes. We cannot do things outside the lockdown regulations. Courts are managing the roll and will be issuing dates for remand detainees to appear. And the sale of cigarettes is not permissible under level four.”

Nxumalo fired a warning shot at the rioting inmates. “The investigation is under way and all those involved in destroying state property will be charged criminally.”

Responding to reports that prisoners feared the prison had no measures to prevent a Covid-19 outbreak, Nxumalo said: “No inmate has tested positive for Covid-19 at St Albans.”

A correctional services official tested positive at St Albans back in April, it was previously reported.

St Albans houses some of the most dangerous prisoners in the Eastern Cape.

On Boxing Day of 2016, three inmates were killed and 26 people were injured during a fight between prisoners and guards at the same prison.