The attorney says that lawyers have to take their emotions out of taking cases, saying there is a thin line between morality and unlawfulness. 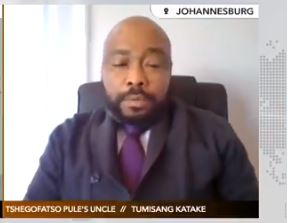 Defence attorney Tumisang Katake has taken a stance going forward that he will no longer represent gender-based violence suspects after his niece, Tshegofatso Pule, was founding hanging from a tree with multiple stab wounds, and she was eight months pregnant.

Katake emotionally said during the funeral last Thursday that he now knows what Karabo Mokoena’s family went through after he represented convicted killer Sandile Mantsoe.

During an interview with Newzroom Afrika, he said he took the case after he consulted with his family.

“Then after I consulted with Sandile, I agreed to represent him. Even after the case of Sandile, I had never represented anyone who was allegedly accused of any gender-based violence offences.

“What I mean now is that I am taking a principle stand, there isn’t going to be any exceptions. What I believe now is that I will not be able to give my best, I have to be objective when I represent somebody. I don’t need anything that is going to remind me of the death of my niece.”

He is aware of criticism of his sudden stance on social media, that some people do not believe he is being sincere.

Katake said that being a lawyer, they have to take their emotions out of it, saying there was a thin line between morality and unlawfulness. He said gender-based violence was wrong but under the constitution, the accused has the right to have legal representation.

He added that he received death threats during that trial, reiterating he was completely aware of the violence against women, and that it did not necessarily take the tragedy of his niece for him to take a stand.

Pule was last seen with her boyfriend as she walked out of the housing complex in which he resided before she was murdered. City Press reports that her best friend recalled her last words were that she wanted to go back home and expressed she was not in a good state of mind.

Pule never made it back home.

Her friend said she had received death threats from multiple unknown numbers, warning her to not talk about her last conversation with Pule.

Fearing for her safety, she decided to not attend the funeral, as she and Pule’s family have been under 24-hour police protection.

Police have made no arrests in connection to the murder.