Police are also are on the hunt for armed suspects who robbed a post office on Saturday. 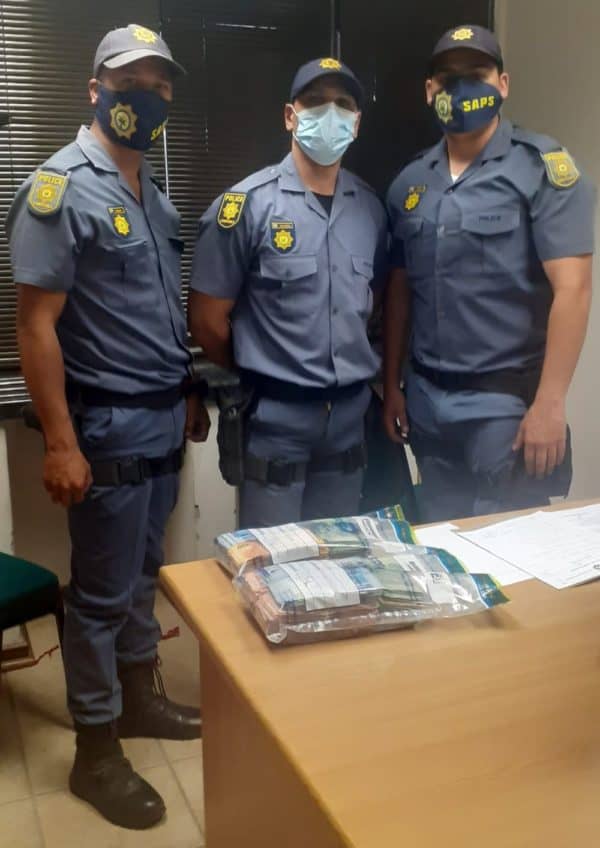 Police found bundles of cash in the backpacks of men at the accident scene. Photo: Supplied/SAPS

Police reported on Saturday that three suspects were arrested at the scene of a car accident after bundles of bank notes were found. Some money was also concealed inside the lining of a jacket.

On Thursday night, while members of the Cradock K9-dog unit were patrolling the N10 near Cradock, in the eastern Cape, they came across a stationary white Ford Icon car in a field next to the road.

One of the four occupants of the car was injured and emergency services were contacted.

“On arrival of the emergency services, the police officials then noticed that the suspects were very nervous and did not want to remove their backpacks, even while being examined by the medical personnel,” said provincial police spokesperson Captain Lariane Jonker.

ALSO READ: Woman gets 14 years in jail after pleading guilty to killing partner and assaulting his alleged mistress

After their backpacks were searched, bundles of cash were found. More money was also found concealed inside the lining of a jacket.

“Three suspects between the ages of 36 and 41 were arrested and will appear on charges of possession of suspected stolen goods in the Cradock Magistrate’s Court soon”, said Jonker.

The investigation is ongoing.

Meanwhile, the Provincial Organised Crime Investigation unit in Gqeberha are on the hunt for two armed suspects who allegedly robbed a post office in Sidwell on Saturday .

“It is alleged that at approximately 11am, two suspects entered the post office on Commercial Road, Sidwell, armed with firearms. Four staff members and one customer were forced into the safe of the post office and locked inside, while the two suspects fled with an undisclosed amount of cash,” said police spokesperson Captain Sandra Janse Van Rensburg.

After the safe was opened, the four victims were taken to hospital for medical treatment due to a lack of oxygen inside the safe.

“Anyone who might be able to assist with any information that can lead to the suspects arrest is requested to contact the investigating officer D/Lt Col Willie Mayi on 082 697 5914 or Crime Stop 08600 1011 or Crime Line SMS 32211 or contact the nearest police station. All information will be treated as strictly confidential,” said Janse Van Rensburg.