The robbery was described as a scene out of a movie as the gang of criminals fired randomly to make their getaway. 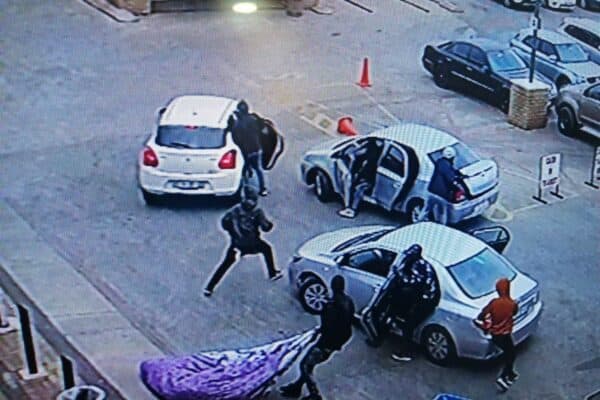 A gang of 15 criminals robbed the Laakeside Mall before fleeing the scene Pic: Screengrab of video

Police are on the hunt for a group of at least 15 heavily armed suspects who stormed Lakeside Mall in Benoni east of Johannesburg to brazenly rob a store wounding at least two people in the spree.

The robbery, which took place on Wednesday afternoon, was described as a scene out of a movie as the gang of criminals fired randomly to make their getaway.

It is believed that the suspect, armed with AK-47s and pistols, stormed the Crossover International shop, robbed employees and stole merchandise before fleeing the scene.

ER24 paramedics confirmed that a man and woman were injured following the robbery at the Lakeside Mall.

In a video being circulated on social media, five of the suspects can be seen exiting Lakeside mall, with some carrying stolen goods, while two suspects are seen discharging their firearms at the mall’s entrance.

Two other criminals are also seen struggling to load the stolen items which they end up leaving behind, while others enter the getaway car.

One of the suspects eventually climbs into the boot of the car before they flee the scene.

“On their way out, the suspects started shooting randomly as they were running towards their getaway vehicles – three sedans.”

Masondo said no arrests had been made yet, and a  case of business robbery and attempted murder has been opened for investigation.