WATCH: Panic in Katlehong as parents fetch pupils due to ‘kidnapping’ threat

Lesufi has warned those alleging that schools are being torched in Katlehong to not spread fake news. 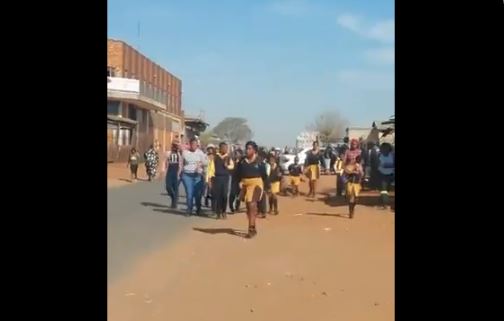 A social media user who alleged that Somalians were targeting schools in the Katlehong area east of Johannesburg has been warned by the Gauteng education MEC Panyaza Lesufi against spreading fake news.

In a video tweet, the user, Nomomde Ndala, alleged that parents were forced to fetch their children from schools due to supposed Somalians attacking both primary and high schools.

“They are entering the schools with weapons, kidnapping children cause its ‘payback’ time. Check up on your loved ones, its a mess,” she tweeted.

“Guys, pupils will now have to pay for their parent’s sins. Everyone is just running around. The worst part is that some kids used transport and buses. Who’s going to fetch them, who is going to take care of them? The school are like getting rid of the kids because they fear for their lives.”

The social media user alleged that the pupils were getting burnt, and this attracted the attention of the MEC.

Lesufi quickly took to twitter to warn the user not to spread fake news as no schools were on fire.

Parents in the eastern township can be seen passing through the streets holding their children’s hands in apparent panic. It is not clear what prompted the panic, however, Lesufi is adamant that no school had been set alight.

Another video surfaced shortly after detailing that no schools in Katlehong were on fire.

The man claimed the children had now been moved from a secure space and were no longer safe.