Thulisile Mthethwa, 45, says she is undecided on whether to cast her vote today because government has done nothing for her and her family. 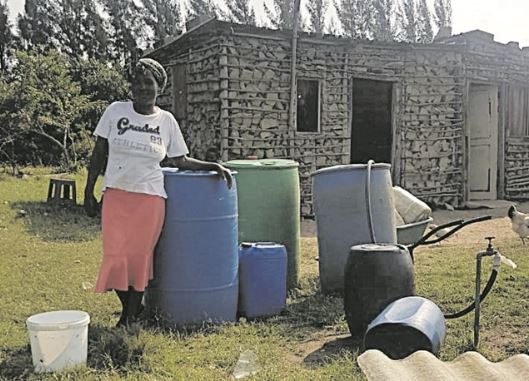 Thobekile Nxumalo in her yard, where several of her neighbours have to collect water from her tap, 6 May 2019. Picture: Makhosandile Zulu

Job creation, housing, electricity, water and sanitation, a clinic and a police station are some of the services that residents of Mfekayi, between Mtubatuba and Hluhluwe in northern KwaZulu-Natal, said would influence their decision as they cast their votes on the second day of special voting yesterday.

Last year, the community went on a protest which led to the looting of a grocery truck on the N2, while another was set alight.

The Zululand Observer reported at the time that protesters ordered some truck drivers to dump coal and manure on the N2, blocking parts of the road.

Ntombi Mkhwanazi, 35, who cast her special vote yesterday, said job creation is a priority for her because many of the young people in the area are educated graduates who are unemployed.

Thulisile Mthethwa, 45, told The Citizen she is undecided on whether to cast her vote today because government has done nothing for her and her family.

None of the adults of working age from her family of 10 is employed and they have to make do with grants to survive, Mthethwa said.

The family is yet to receive an RDP house and a toilet, although these have been provided for others in the area, she added.

“So why should I vote?” she asked. “Government does not help us with anything.”

Thobekile Nxumalo said what is important for her is getting a house for her family of eight.

The poor supply of water in the area has persisted for over five years, one resident said, while some areas in Mfekayi have been without electricity for almost 20 years.

Maria and Rebecca Mthethwa, 79 and 77 respectively, who cast their special votes on Monday, said at times they are forced to hire vehicles to transport them to the nearest clinic which is almost 20 kilometres away.

This, they said, is a challenge because sometimes they are short of money to hire a vehicle.

The nearest hospital is between 50 and 60 kilometres away, which posed a problem for their family.

Last year, after two of their family members were shot, an ambulance took almost five hours to arrive at the homestead, they said.

When the ambulance did eventual arrive, it only picked up one of the victims of the shooting, the two elderly women said. The other subsequently died.

Increased police visibility through patrols could be of assistance because crime is rife in the area, the Mthethwas said.

Goodman Khumalo said in addition to the provision of electricity, streetlights should be added in the area as this would help curb crime.

“Maybe government should consider providing residents with tanks so they can store rain water,” Khumalo suggested as a way of addressing the water issue.

Another issue Khumalo said is of importance is tarring the area’s main road, which branches from the N2, and adding speed bumps to it as well as a pedestrian pavement because cars speed on the current gravel road.

Khumalo said in March, an elderly local and a seven-year-old died after being hit by a car speeding on the gravel road.