Police and Fikile Mbalula had their hands full calming residents who had no time for a campaigning Ramaphosa. 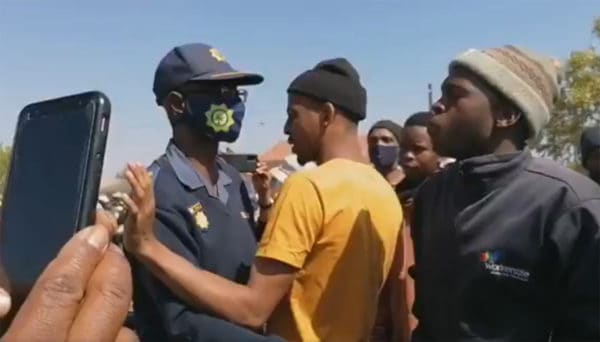 President Cyril Ramaphosa received a less than warm welcome to Naledi, Soweto, on Saturday morning, as he joined the ANC on the campaign trail on the last voter registration weekend before the upcoming local government elections.

Ramaphosa was greeted by furious residents who accused the ANC of only remembering them when it is time to campaign for votes, and police had their hands full when residents tried to disrupt the president’s visit.

Among residents’ concerns was a continued lack of electricity in the community which is often the target of load reduction.

Ramaphosa was accompanied by the ANC’s head of elections Fikile Mbalula and NEC member David Mabuza. Mbalula himself had to calm tempers, when a group of residents tried to prevent the president from speaking.

He acknowledged the community’s concerns, but urged them to let the president speak, as one resident reminded him that “the only thing that we want is electricity!”.

When Ramaphosa was finally allowed to speak, he ensured the community that he had spoken to Eskom and had urged the utility to resolve the electricity crisis as soon as possible.

He mentioned the shortage of substations in the area, as well as the problems caused by illegal connections and cable theft. He recommended the installation of prepaid electricity meters to help resolve some of the issues, and alleviate the pressure on the grid caused by electricity theft.

One party who seemingly enjoyed the welcome Ramaphosa received in Naledi was the DA, who said the reception underscored the ANC’s precarious position in the upcoming elections.

DA Chief Whip Natasha Mazzone said in a statement that the upcoming elections will be “the moment of reckoning for the ANC, as voters use the polls to boo the ANC out of office in cities and towns throughout South Africa.”

Mazzone reiterated that the DA is ready to negotiate new coalitions in municipalities where they might not be able to win outright majorities.

And while she apparently welcomed the protest against Ramaphosa in Naledi, she reminded voters that protests “do not change governments.  Votes do.”