A day in the life of a politician on election day

When voting ends at 9pm, a candidate’s day is only halfway through. 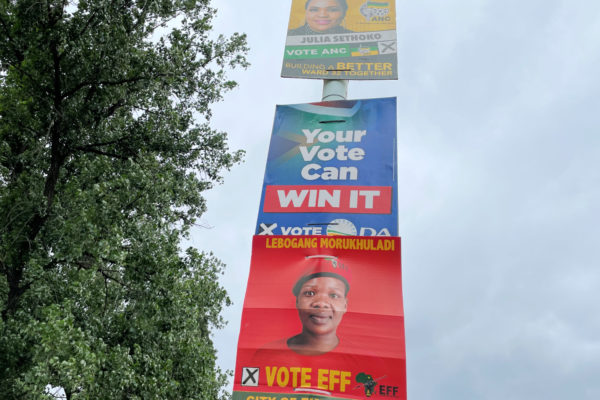 After two and a half months of relentless campaigning, virtual baby kissing and erecting more posters than he could count, ward councillor Simon Lapping says the last few days in the run-up to the elections, election day and the counting days after are some of the most intense and exhausting periods in any public representative’s career.

“And everything has become WhatsApp, social media and public platform driven. Campaigning is now twenty-four seven.”

“The public are reticent to attend meetings or gatherings and the pace of news, online conversations and keeping up with your current responsibilities as a councillor while fighting re-election is very challenging.”

He says that due to budget constraints, he and a handful of volunteers put up every single DA poster in his ward. “I don’t need to go to gym for quite a while,” he quips.

But he says the sweat is worth it.

“Forget my political role, as a citizen I feel that this election is extremely important to South Africa.

“We are on a slippery slope and the only people who can change things, are you and me. If you don’t vote, frankly, you have no right to complain about things.”

Lapping will spend the balance of the week before the elections virtual-canvassing not only for votes, but to encourage as many folks as possible to get out and vote.

Before his turn in politics, he was an executive chef at some of Johannesburg’s top hotels.

“I will spend Sunday in the kitchen,” says Lapping, “cooking up a storm to serve the volunteers who have stood by me, and helped without financial reward during this campaign, a gourmet lunch on polling day.

“It’s my way of being of service to them and sharing more than a boerewors roll with the giants who have allowed me to stand on their shoulders.”

Election day will typically start at around 5am, with a role call of voting stations, ensuring that all were open, operational and compliant.

Before and after lunch, Lapping says he will head to as many voting stations as possible, in his own ward as well as supporting fellow candidates in Ekurhuleni.

ALSO READ: Institute of Directors SA urges voters to ‘turn out in their numbers’ on election day

“It is an extremely stressful day. There’s media, there’s voters, there’s officials and there’s always some kind of crisis.”

During the previous municipal elections, he says he had to beg and borrow emergency lights and gas heating equipment from people when a tented voting station was set up without any power, in the middle of winter.

When voting ends at 9pm, a candidate’s day is only halfway through.

Vote counting commences and we are present at the process. This usually lasts until around 5am the next day. “By that time not even matchsticks can prop up your eyelids as the adrenalin rush of a 24-hour day wanes and things calm down somewhat.”

Then, it’s the wait.

Results are sent into the IEC and one by one wards and metros are called, then at times re-guessed and ultimately officially determined.

“Many of us head to bed for a nap but keep our eyes on the Election Centre where there’s usually a hive of activity for the three or four days after the election.”

At home, it’s back to business and trying to get more some rest in-between.

“It’s a two-way waiting game for results. You’d learn quickly whether or not you’ve won your ward, but it takes time for counts to treacle into the IEC in order to know which party actually won the metro.