The ANC in Gauteng is headed for tough coalition talks with opposition parties after its electoral support plummeted in the province's municipalities. 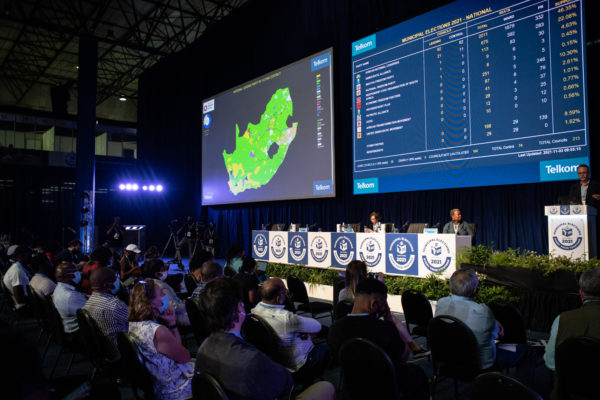 A general view at the IEC results center in Pretoria on 3 November 2021. Picture: Jacques Nelles

With vote counting almost complete after Monday’s local government elections, the ANC in Gauteng is headed for tough coalition talks with opposition parties after losing majorities in nine municipalities in the province.

Gauteng has 11 municipalities consisting of the three metros of Tshwane, Johannesburg and Ekurhuleni, and six local and two district municipalities.

The ANC has only managed to retain control of Lesedi Local Municipality in Heidelberg with 50.43%. But this is a far cry from the 2016 local government elections when the governing party got 62.08% of the vote.

The Democratic Alliance (DA) remains the official opposition in Lesedi with reduced electoral support at 20.32%. In 2016, the DA received 23.77%.

The Economic Freedom Fighters (EFF) came in third in this year’s polls at 13.53%, compared to the last election when it got 10% of votes.

After losing control of Gauteng’s three key metros in 2016, the ANC has failed once again to win majorities in the capital city of Tshwane, the country’s economic hub in Johannesburg and in the industrial City of Ekurhuleni.

The City of Tshwane is also set to be governed through a coalition government again.

The troubled Emfuleni Local Municipality, which has been run by the ANC, became a hung council after the party received 39.71% of votes.

In Mogale City Local Municipality, the ANC received 40.17% of votes compared to 2016 when it got 48.84% and lost control of the municipality for the first time. The party later regained control of Mogale City through the help of the EFF.

For the first time since the dawn of democracy, the ANC has failed to win Merafong Local Municipality with an outright majority.