DA leader Mmusi Maimane 'has further made wild and unfounded claims that must be rejected with contempt,' the Health Minister says. 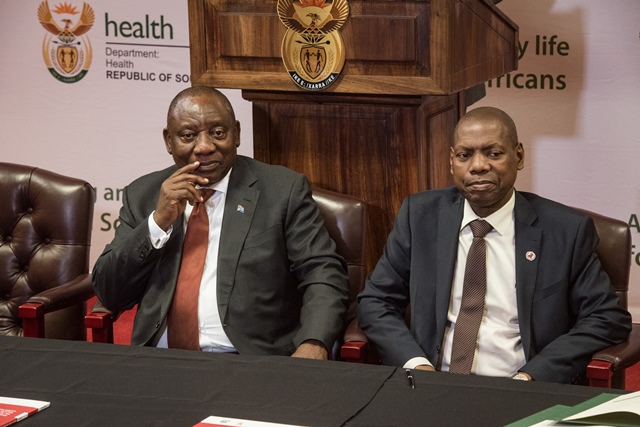 The DA is welcome to take the National Health Insurance (NHI) Bill to the Constitutional Court, says Health Minister Zweli Mkhize, adding he is “absolutely not concerned about this threat”.

This was Mkhize’s response after DA leader Mmusi Maimane questioned the bill’s constitutionality on Tuesday.

Maimane wrote to National Assembly Speaker Thandi Modise to urgently request that she instructs parliamentary legal services to obtain a legal opinion on the bill before it appears before the portfolio committee on health.

He has also asked the DA’s legal team for an opinion on whether the bill is constitutional.

The party is questioning the bill’s constitutionality as it seemingly takes away provinces’ constitutionally enshrined right to handle health services.

Mkhize responded with a statement on Wednesday.

“The DA is welcome to take the bill to the Constitutional Court as they threaten. I am absolutely not concerned about this threat,” he said.

“I need to assure the public that this bill has been subjected to scrutiny by various constitutional experts, and the state law adviser has issued certification to confirm the constitutionality of the bill.

“I have certification dated January and October 2018 and another dated March 2019. The opinion the DA seeks has already been sought. Parliament is at liberty to seek its own legal advice if needed.”

Mkhize said the bill “makes no effort” to take away provinces’ concurrent powers, which are protected by the Constitution.

“Provinces will continue to have concurrent powers in the management of health services under the NHI. These powers and roles will be the subject of discussions between the national and provincial government in line with the health reforms,” he added.

“After all, the current powers of provinces were developed through consultations between national and provincial leaders that led to the promulgation of the National Health Act. The same process will be followed.

“Changing legislation is not unconstitutional. Changing circumstances will always ensure that the laws evolve to suit the needs of the country at each stage. Section 146 of the Constitution guides us where there is no proper alignment between national and provincial legislation.”

The DA has other concerns about the NHI, namely: The establishment of the National Health Insurance Fund as a public entity or state-owned enterprise; the nationalisation of healthcare and clear erosion of provincial powers; fragmentation of the health system; the additional tax burden that will be imposed on South Africans and the complete removal of choice for South Africans.

Mkhize said the current cost implications were carried in the existing allocations that have been made public.

“Due to many variables, some future costs will be made public when they become available. However, the NHI will be implemented in a responsible manner that the country will afford.”

He added the NHI, as a schedule 3 state entity, had less power than other state-owned entities such as Eskom.

“Thus, strong oversight will ensure good governance and transparency will ensure continuous public scrutiny over its financial activities as such an entity receives funds from the fiscus and is not permitted to take risks and participate in speculative and unsecured borrowing and lending.

“Maimane has further made wild and unfounded claims that must be rejected with contempt. He claims that the NHI will lead to the nationalisation of healthcare which will be fragmented, removing the choice of healthcare providers for citizens and adding a tax burden to South Africans,” Mkhize said.

“Clearly, he has not studied the bill properly to understand the fallacy of his claims.”

Mkhize said while the NHI would depend on revenue derived from the fiscus, National Treasury’s progressive taxation policies were decided on carefully after analysing the tax burden and would “ensure the best interest for South Africans”.

“The DA claims are an attempt to agitate the fear of the unknown.”

DA MP and spokesperson on health Siviwe Gwarube responded to Mkhize in a statement of her own, accusing him of “playing politics” with the bill.

“Mkhize’s statement slams the DA for questioning the clear overreach of the bill by stating that it has been scrutinised by his department.

“What he clearly misunderstands is the role that parliament has in holding the executive to account. Parliament is not here to simply rubber-stamp problematic and often disastrous pieces of legislation.”

She said the DA was not “just obsessed with this constitutional question on spurious grounds”.

“There are legitimate reasons why the Constitution and indeed the National Health Act have divided responsibilities the way that they have done. The government needs to be accountable to the people we serve.

“A centralised and nationalised health system will lead to poor health outcomes, little accountability, and a sluggish system that is bound to the be the final nail in the coffin of healthcare in this country,” Gwarube added.

“Clearly out of ideas, Mkhize accuses the DA of seeking to maintain the status quo and somehow protecting the privileged through our opposition of this bill. This is simply false. The DA unequivocally supports universal healthcare for all South Africans.”