25,000 troops could be deployed as DA calls for protection of food, fuel security

Mapisa-Nqakula told the Parliament's joint standing committee on defence on Wednesday evening that Ramaphosa was unhappy about the initial deployment of 2500 soldiers. 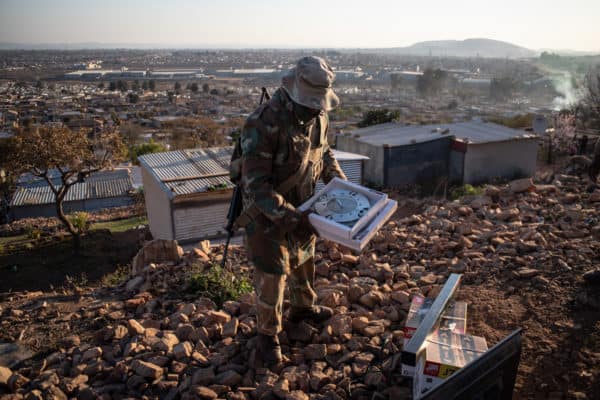 A member of the SANDF can be seen in Mamelodi where they searched residents homes for items possibly looted from Mams Mall during the riots and unrest, 14 July 2021, Pretoria. Picture: Jacques Nelles

Minister of Defence Nosiviwe Mapisa-Nqakula says government has requested at least 25,000 troops from the South African National Defence Force (SANDF) to be deployed to KwaZulu-Natal and Gauteng to help quell the violence.

ALSO READ: State of emergency SA: What this would mean for your rights

This follows the meeting of the National Security Council, chaired by President Cyril Ramaphosa, that took place on Tuesday.

Ramaphosa, on Wednesday, also met with leaders of political parties in a bid to find solutions on how to address the ongoing social unrest.

‘We don’t want to mobilise for the sake of mobilising’

Mapisa-Nqakula told the Parliament’s joint standing committee on defence on Wednesday evening that Ramaphosa was unhappy about the initial deployment of 2500 soldiers, with the president suggesting that more soldiers be deployed.

“The president said at the meeting of the National Security Council that he is unhappy about with those numbers and that we should not worry about the costs, but we should be worried about the rampant looting and also the lives of South Africans who are being killed.

“So the president then made a proposal that let us rather escalate the number to 10,000. That was last night,” the minister said.

The minister said opposition parties, however, had indicated that they wanted 75,000 soldiers deployed instead.

“As we were preparing documents this morning for the president’s signature for 10,000 [soldiers], then the opposition parties unanimously made a proposal that the president should increase the numbers to a strength of plus/minus 75,000, including members of the Reserve Force,” she said.

She said it was then agreed that Ramaphosa’s proposal should be scrapped, further saying that government had made a request to deploy 25,000 soldiers.

“We discussed with the president after that meeting that we don’t have to say 75,000, but we should also not keep to the 10,000, which the president had proposed, that we should rather find a middle way because we don’t want to mobilise for the sake of mobilising. Our mobilisation must also be informed by the continuous assessment of this situation on the ground.

Former president Jacob Zuma’s incarceration had triggered widespread riots, notably in KwaZulu-Natal and Gauteng, with the death toll from the riots in both provinces rising to 72, while a total of 1,748 people had been arrested as of Wednesday.

The widespread looting and torching of shops in the provinces has left whole areas without basic groceries.

While the Democratic Alliance (DA) has welcomed the deployment of extra soldiers, the party has urged government to ensure that the deployment was used to protect food, medical and fuel security.

“The next big crisis will be the threat to food security in KZN – along with the supply of medication and fuel – and protecting these supply chains must be a priority of the SANDF deployment.

“With warehouses, bakeries and distribution centres looted or destroyed throughout the province, it is impossible to resupply supermarkets and shops locally. And with trucks still being looted and burnt on the major arterial roads in the province, these supplies cannot reach the shops from elsewhere,” DA leader John Steenhuisen said in a statement on Thursday.

Steenhuisen said it was critical that a large part of the military deployment be used to open up and guard major routes – including the N2 and N3 and intersections – as well as to provide security for shops in effort to restock without any disturbances.

“And while they must also assist Saps [South African Police Service] with law enforcement duties, protecting the province’s food security and supply chains must be a top priority,” he said.