Gauteng will not be declaring a provincial state of disaster. 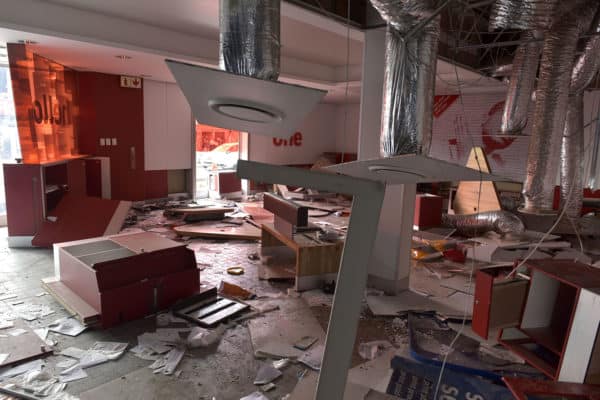 The inside of the Capitec bank in the area of the Pan Africa Mall in Alexandra, Johannesburg, 16 July 2021. The area was one of the hotspots of looting recently and the vast majority of businesses in the area are wiped out. Picture: Neil McCartney

Gauteng Premier David Makhura on Friday said a preliminary estimation showed that R3.5 billion in damages was caused by the recent deadly unrest in parts of the province.

Speaking at a media briefing on the province’s economic recovery efforts and the Covid-19 pandemic, Makhura said 14,500 jobs had been affected by the violence.

However, Makhura said Gauteng would not be declaring a provincial state of disaster, like the KwaZulu-Natal (KZN) government did on Thursday.

The premier said the impact of the damage to infrastructure in the province was not as extensive as in KZN.

“I want to repeat that in our province we basically suffered the destruction of businesses and the displacement and destruction of property. This is trading property,” Makhura said.

“The unrest impact on Gauteng is different from the impact in KZN. So, there were no factories here or warehouses that were attacked.”

KZN Premier Sihle Zikalala on Thursday said the province suffered severe damages not only to businesses but also to public infrastructure.

Zikalala said the estimated cost of damages was R1.5 billion, with municipalities requiring about R47.7 million.

Makhura said despite the limited damage to infrastructure in Gauteng, the impact on small businesses and the livelihoods of residents had been more severe.

Makhura said 30 out of 500 township malls in the province were attacked.

“What we are looking at is how do we bring back these business operations. We are going to work with the national government on the [economic] packages announced,” he said.

Gauteng MEC for economic development, Parks Tau, said the province had developed a war room that would accelerate the response of different departments in the wake of the riots.

He said the response would include financial packages and non-financial measures.

“We are accelerating the implementation of the Township Economic Partnership Fund, and we are looking at interventions with regards to food security and income support,” Tau said.

More than 1,700 people have been arrested across Gauteng following the violent unrest. Of the over 300 deaths confirmed, 79 were from Gauteng.

READ NEXT: Gauteng is not yet ‘out of the woods’ on Covid-19 cases, Makhura warns