Load shedding was implemented this week after a series of generating-unit breakdowns at the Kriel and Tutuka power stations this week. 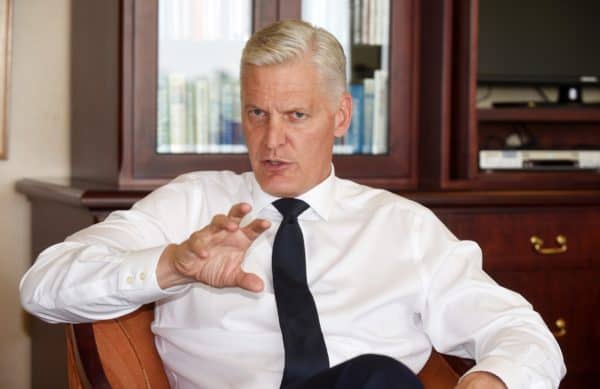 While stage 2 load shedding ended at 5am on Thursday, Eskom chief executive André de Ruyter warns further power outages could be in our immediate future.

De Ruyter said Eskom has a shortage in generation capacity of between 4,000 and 5,000MW, roughly the amount needed to keep the ageing power generation system going.

Without that, De Ruyter said on eNCA, the grid is “susceptible to breakdowns and failures”.

He explained: “Once we have that capacity added to the grid, we see that there will be a significant improvement in power generation.”

However, load shedding in itself is also causing damage to the grid.

“Municipal infrastructure is also not well maintained and therefore not able to cope with the switching on and off that occurs with load shedding,” de Ruyter said.

Despite this, Eskom will not be implementing load shedding in the run-up to South Africa’s local government elections on 1 November.

The recent outages – first implemented on 7 October – were necessary after a series of generating unit breakdowns at the Kriel and Tutuka power stations.

Spokesperson Sikonathi Mantshantsha said the delay in returning generating units at Tutuka, Grootvlei and Kendal also contributed to the depletion of emergency reserves.

Load shedding was then extended to Thursday, 14 October, with Mantshantsha explaining it was necessary “to address other additional risks in the generation fleet”.

At the time, Eskom was still recovering four units at Tutuka, which had experienced conveyor belt failures.

The fleet also suffered a cluster of boiler tube leaks, and emergency reserves had been depleted due to additional breakdowns at Kusile, Hendrina and Komati power stations.

The return of one unit at the Majuba power station was, unfortunately, not enough to stave off power cuts.

Load shedding ‘not a crisis’

Speaking to journalists in Potchefstroom, North West on Friday, Ramaphosa said it was “a looming crisis”. The president was confident “Eskom would deal with the breakdowns”.

“I believe in the management that they will handle this and make sure that the energy challenges we are facing are brought under control”, Ramaphosa said.

ALSO READ: ‘Light at the end of this tunnel’: Ramaphosa on the return of load shedding

Meanwhile, energy expert Ted Blom believes South Africans may have to endure load shedding for the next five years, despite the power outages first being introduced 14 years ago.

In an interview with Jacaranda FM on Monday, Blom explained the reason for this was due to problematic units being patched up, instead of being completely repaired.

'It's an assumption': Duarte clarifies ANC's claims of sabotage at Eskom
3 hours ago
3 hours ago

'It's an assumption': Duarte clarifies ANC's claims of sabotage at Eskom
3 hours ago
3 hours ago