Republic Monakedi is being treated in an undisclosed hospital after the second attack on a Mopani municipal official recently. 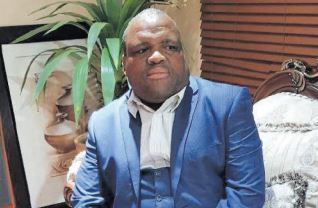 Mopani district municipality manager Republic Monakedi is fighting for his life in an undisclosed hospital in Limpopo. Picture: Supplied

The municipal manager of the Mopani district municipality in Limpopo, Republic Monakedi, is fighting for his life in an undisclosed hospital after thugs assaulted him.

Colonel Moatshe Ngoepe said Monakedi was with another man in his office in Rissik Street in Polokwane when the attackers ambushed them at about 10pm on Sunday night.

According to Ngoepe, the attackers aimed a gun at the two men and demanded money. When they did not hand over any cash, the men searched them and took their cellphones, wallets and car keys. Then they assaulted them.

“The victim sustained severe injuries and he is in hospital.

“The suspects in this matter are unknown and no arrests have been made.

Khotongo Mopai, a community activist in Tzaneen, which falls under Mopani, described Monakedi as a harmless workaholic who would not hurt a fly. Mopai has pleaded with community members to work with the police to bring Monakedi’s attackers to book.

“The attack on Monakedi is an insult to us and the province because Limpopo has for many years been seen as one of the safest places in the country.

“But if we work together against crime, Limpopo will become a destination of choice for tourists who will spend money here,” he said.

Mopani District Municipality spokesperson Witness Tivha said the council was appalled by the incident. “The municipality hopes the police investigation reveals the circumstances surrounding this attack and they put the perpetrators behind bars for a very long time.”

He added that the incapacitation of the municipal manager would not negatively affect service delivery.

Tivha said: “The institution has other capable senior managers.

“We have also asked the police to do a security assessment on the municipal manager because, in light of the attack, his safety is now of paramount concern to us and the family.”

The attack on Monakedi followed another on the chief financial officer of the municipality recently.

Quiet Kgatla and his family were attacked by thugs in the dead of night recently. The attackers also demanded money before brutally assaulting him, his wife and children.