The union accused DG Nape Nchabeleng of leading the premier’s office into R3.9 million of irregular expenditure for the 2015-16 financial year. 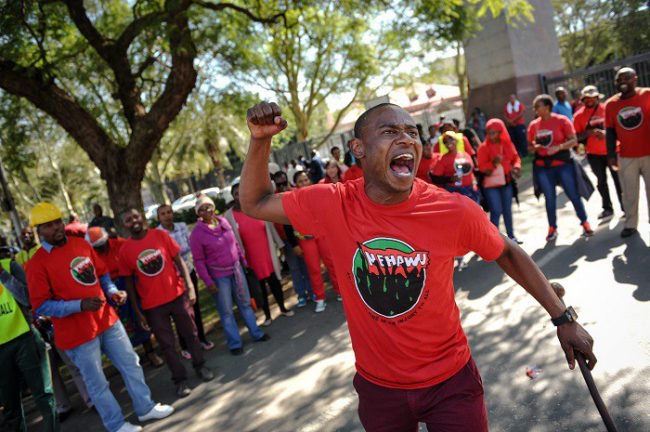 The National Education, Health and Allied Workers’ Union (Nehawu) is calling on Limpopo Premier Stan Mathabatha to fire the province’s director-general for alleged irregular expenditure, or face a revolt.

The union accused the director-general, Nape Nchabeleng, of leading the premier’s office into R3.9 million of irregular expenditure for the 2015-16 financial year. The expenditure is reflected in the attorney-general’s report for that year and has been rolled over to other financial years to date.

The union said Mathabatha fired the previous director-general, Madikolo Rachel Molepo-Modipa, for the same offence after her office accumulated R39,000 of irregular expenditure.

Nehawu said Mathabatha must axe the current director-general or “he, too, must kiss his job goodbye”.

“The premier’s office is the mirror of Limpopo and it must lead by example. When such a big office accumulates such irregular expenditure, then the other departments will also follow suit,” said Nehawu’s Samson Magomane branch chairperson, Norman Mavhunga, yesterday.

Mavhunga said that section 81 (1 and 2) of the Public Funds Management Act stated that if an accounting officer of a department or a constitutional institution committed an act of financial misconduct, they must be subjected to disciplinary proceedings.

“But our premier cannot see anything wrong with Nchabeleng. Instead of taking action, Mathabatha treats him with velvet gloves.

“Ironically, the previous director-general committed a similar offence in 2016 and Mathabatha did not think twice about kicking her out. She was fired for having incurred a mere R39,000 in irregular expenditure.

“We have nothing against Mathabatha. All we want is for him to treat people equally in an endeavour to lead a financially healthy province,” added Mavhunga.

Branch secretary Ndivhuwo Madzusa said the union had written countless letters to the premier requesting that he treat the matter with the urgency it deserved.

“But it seems our pleas have fallen on deaf ears. That is why we elevated the matter to the office of the Minister of Finance Tito Mboweni.

“We hope and believe the minister will take action and ensure that financial management regulations in public institutions are fully adhered to and that all revenue, expenditure, assets and liabilities are managed effectively and efficiently.”

Attempts to get comment from Nchabeleng were not successful as his phone was apparently turned off.

Mathabatha’s spokesperson and Limpopo provincial government acting spokesperson Kenny Mathivha said the premier’s office was the only department in the province that got a clean bill of financial health from Auditor-General Kim Makwetu for the past financial year.

“We do not deny there was such irregularity in that period, nor do we agree. The union is not the auditor. If they suspect foul play with our books they must consult the auditor-general,” said Mathivha.