The video shared on Twitter shows Theresa Ratsupa telling the man to call them the k-word again, as he physically assaults them, pushing and hitting them one by one. 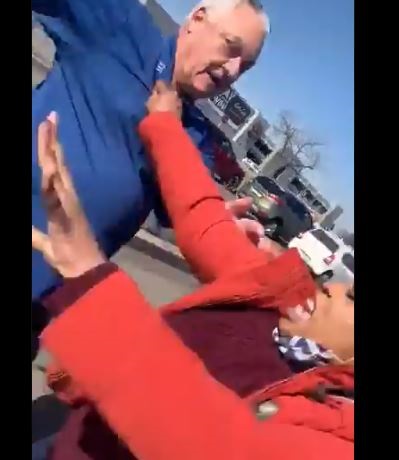 A video taken by a black female at an East Rand mall has gone viral after a white man called her family the k-word and attacked them.

Two videos shared on Twitter shows Theresa Ratsupa telling the man to call them the k-word again, as he physically assaults them, pushing and hitting them one by one.

Speaking to The Citizen, Ratsupa said the altercation begun at the mall’s parking lot. Her mother had just parked when the man in the video was getting out of his car and hit their car’s door.

“My mother rolled down her window and asked him why he doesn’t apologise for hitting her driver’s door. He said why must I apologise when you park your car like shit. We told him not to swear at us and just apologise, he then called us the k-word.

“I just started recording when he continued swearing at us, saying ‘f*k’ you f*k you and when he called us ka**ir. Me, my sister and my mother got out of the car, he pushed me and throw my phone (to the ground) when I told him I am recording this. I think he believed it would get rid of the evidence.”

Ratsupa said they retaliated because the man kept insulting them and both her mom and sister were physically hurt during the altercation.

“Nobody helped us, everyone just looked on and watched, only the car guard stepped in and block the man from continuing to hit us.”

The squabble ended when the man’s daughter and grandchildren returned from the mall and when things cooled down the mall’s management heard each side of their stories but nothing further could be done.

Ratsupa said they pressed charges of assault, and malicious property damage at Boksburg North police station after their car was allegedly scratched on purpose by the perpetrator and police are investigating.