'The fire teams are hoping that rain, expected to start at about 14:00 today will extinguish the fire,' Otto added. 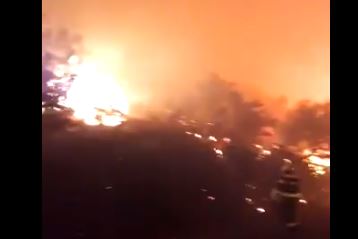 Cape Winelands firefighters are battling to contain a fire that broke out on the Du Toitskloof mountain range in the early hours of Thursday.

According to the Cape Winelands District, the fire was being fanned by strong berg winds and currently burning out of control. The fire was along the N1 Rawsonville weighbridge, but Western Cape Traffic chief Kenny Africa confirmed that all roads in the area remained open.

“Since there is little fuel bearing vegetation due to the fires earlier this year and currently no threat to life or livelihood, the fire teams are monitoring the situation closely,” the district’s spokesperson Joanne Otto said in a statement.

Otto said there were three vehicles on the ground and these teams were actively extinguishing any spot-fires that flared up as a result of coals being blown onto verges and sidings.

“The fire teams are hoping that rain, expected to start at about 14:00 today will extinguish the fire,” Otto added.