Mortuaries buckling as bodies pile up in Phoenix

According to the National Funeral Practitioners Association, there are over 300 unclaimed bodies currently stored in mortuaries in Phoenix. 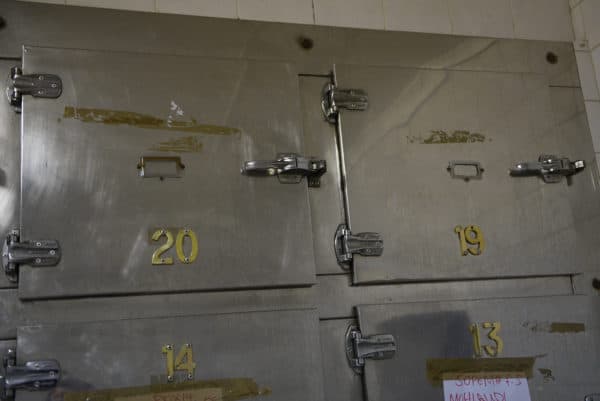 The body storage facilities at Sopema Funeral Services are seen, 21 July 2020, at their premises in Soweto. Picture: Michel Bega

The African Transformation Movement (ATM) has called for an inquest into the deaths of “more than 300 black people” in Phoenix, KwaZulu-Natal.

This is after National Funeral Practitioners Association of South Africa (Nafupa) revealed there are over 300 unclaimed bodies currently stored in mortuaries in Phoenix, located in the north of Durban.

The matter comes amid the racial tensions between the Indian community of Phoenix and the neighbouring townships of Zwelisha and Bhambayi, tensions that were sparked by the recent wave of rampant looting and violent unrest in parts of KwaZulu-Natal.

The number of deaths increased to 22, according to KwaZulu-Natal Premier Sihle Zikalala, with several missing and believed to have died in criminal and vigilante acts to date.

15 arrests have been made so far in relation to the racial tensions.

Speaking to eNCA on Wednesday, Nafupa president Muzi Hlengwa revealed that mortuaries in Phoenix had reached their capacity.

“The situation in Phoenix has gone to what we can say it’s beyond they control of mortuaries. The maximum capacity at the storage facility in Phoenix is 500 bodies [and] they have reached that now… can’t even admit any more bodies.

“So [we are pleading] that the family members who have their relatives being missing must come and try to see if they can’t find them at the government mortuary since last week’s riots. Most of the bodies that have been piling [up] there are directly linked to what happened last week.

“Yesterday, they told me that they have over 300 bodies which are a backlog now whose families some of them have not come in to claim. Some have came to claim, but they haven’t yet undergone the [post mortem process] simply because they are overwhelmed with the amount of bodies,” Hlengwa said.

Meanwhile, the ATM has since approached the South African Human Rights Commission (SAHRC) in KwaZulu-Natal to request an inquest into the incidents in Phoenix and its surrounding areas.

Speaking to The Citizen on Thursday, ATM spokesperson Sibusiso Mncwabe said the party had approached the SAHRC because they want to find out the exact number of deaths, as well as the exact details of what happened.

Mncwabe said they believed that the deaths were related to the racial tensions.

“Our concern is there are more bodies or deaths than what has been reported. What we know is that those who were coming from their looting spree were stopped and killed. The looters were being looted, but the people who didn’t even participate were brutally killed.

“Phoenix residents went out to the streets and, burned informal settlements, houses and cars which resulted in many deaths. So we need a judiciary inquiry or an inquest in these specific incidents because it is a rational issue now. This has nothing to do with the looting and the unrest,” he said.

Acting Minister in the Presidency Khumbudzo Ntshavheni on Wednesday revealed that since the unrest, a total of 234 related deaths were reported in KwaZulu-Natal.

Ntshavheni said the police is investigating 151 murder cases while 83 inquest dockets have been opened in KwaZulu-Natal.

The Citizen has reached out to the South African Police Service (Saps) in KwaZulu-Natal for comment. However, no response had been received by the time of publishing.

Focus on local government is what these polls are about
3 days ago
3 days ago
PREMIUM!

Focus on local government is what these polls are about
3 days ago
3 days ago
PREMIUM!