I stand by my comments on ‘white economy’, Masina tells MPs

ANC spokesperson Pule Mabe said on Monday Masina's statement on the nationalisation of the economy fell outside the confines of the party's policy position. 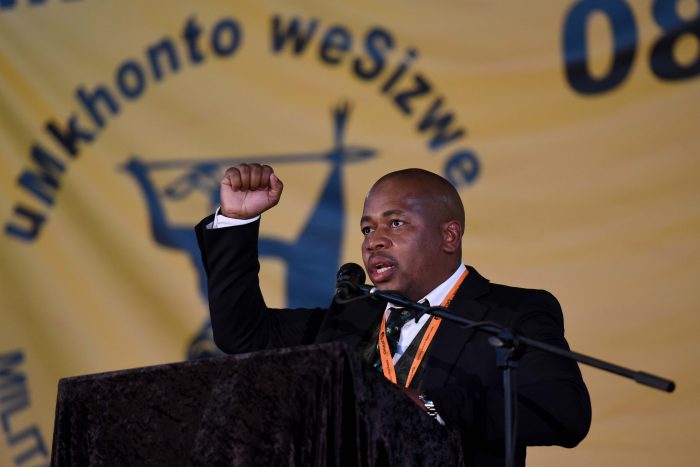 Days after being taken to task by the ANC for supporting an EFF tweet about collapsing “the white economy”, Ekurhuleni Mayor Mzwandile Masina told parliamentarians that he stood by his comments.

Masina’s tweet dominated a virtual sitting of the Portfolio Committee on Cooperative Governance and Traditional Affairs on Wednesday.

“Although Mayor Masina appears to say that the white economy must collapse, it’s the same companies who he is standing next to to receive donations for the poor in his own municipality. As a leader in our society, he should exercise unity in the same level that is required from all of us, regardless of race. But to attack the very people who you are calling upon to assist you, is childish,” Hoosen said.

“The mayor also spoke of revenue collections. Now if you want white business to fall apart, I am afraid your revenue collection will be worse. What you should be doing is assisting as many businesses as possible regardless of whether they are owned by whites or blacks,” Hoosen told Masina.

Masina told the committee that there was a temptation to personalise issues.

“I said in my tweet and I wrote it myself… I said, nationalise the commanding heights of the economy. If that is racist according to you (Hoosen), you must think again. It’s an unfair comment because I don’t think you understood the part. I attached what member [Julius] Malema had said. I then qualified expressively where me and him agreed and I am not going to take that back because to nationalise the commanding heights of the economy is what we have been calling for. It’s not reduced to disrupting white business. I challenge you to go and see what I said,” Masina said.

In a statement on Monday, ANC spokesperson Pule Mabe said Masina’s statement on the nationalisation of the economy fell outside the confines of the party’s policy position.

Mabe said views shared by the mayor on a personal account confused the party’s constituency and members as to what the ANC stood for.

Shortly after the ANC statement, Masina responded that if removed, he would accept this without hesitation.

ANC MP Bheki Hadebe said some members in the committee were hell-bent on making their own conclusions.

“Let’s take what he has clarified as the facts,” he said.

On Ekurhuleni’s Covid-19 response, Masina said their biggest challenge was the non-adherence to social distancing guidelines in informal settlements.

He also said land invasions were on the rise as many believed that they would not be evicted during the lockdown.

There are 868 Covid-19 cases in the Ekurhuleni municipality and 526 people have recovered.