The Department of Public Works says insuring all government-owned buildings worth billions was unaffordable. 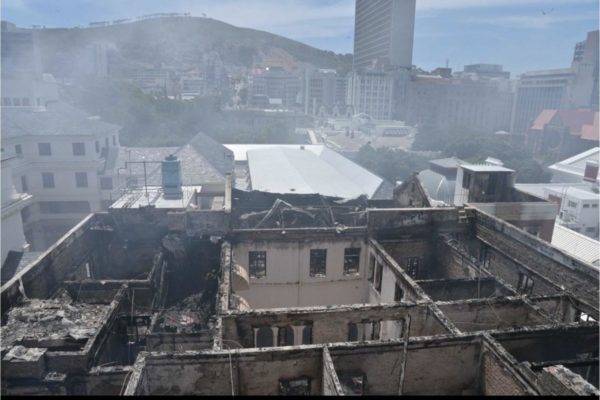 The National Assembly building in Parliament precinct destroyed by fire wasn’t insured, leaving the massive costs to rebuild to the taxpayer.

The fire broke out on January 2 and saw at least 300 firefighters fight the raging blaze for two days.

According to the Sunday Times, Department of Public Works acting director-general Imtiaz Fazel on Tuesday broke the news to National Assembly Speaker Nosiviwe Mapisa-Nqakula and political party representatives, telling them that the houses of Parliament do not have insurance cover.

Experts estimated that repairs could cost at least R1 billion.

The City of Cape Town’s preliminary report into the incident revealed how Parliament wasn’t compliant with fire safety regulations and had lax security on the days leading to the fire breakout.

It found that sprinkler valves had not been serviced since 2017 and that the fire doors in Parliament were not properly closed when the fire broke out.

The cheap latching placed on the fire doors exacerbated the fire which then quickly spread across the building.

Fazel told the newspaper that insuring the State’s property portfolio of more than 82 000 building worth R141 billion was unaffordable.

Although he could not estimate the costs required to rebuild the National Assembly, Fazel told the politicians that public works would have to make an application for funding.

Fazel added that the State is responsible for compensation for all costs and claims, according to Treasury regulations.

Public Works Minister Patricia de Lille said Mafe was caught on camera at around 2am on the day the fire broke out.

The Cape Town Magistrate’s Court postponed the case to Tuesday.

Parliament spokesperson Moloto Mothapo said presiding officers received the damning report into the fire and would only comment after the Hawks’ investigation is concluded.