After an hour of disruptions, Ramaphosa was finally allowed to table the Presidency’s budget vote. 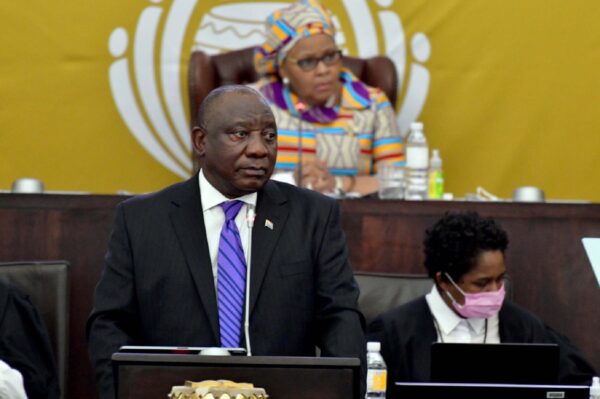 President Cyril Ramaphosa has called on MPs to put South Africans first as they perform their duties, saying the “greatest disservice” parliamentarians can do is to become distracted from addressing the country’s pressing socio-economic challenges.

“The people of our country must come first in everything that we do.

“And the greatest disservice we can do to our people, at this difficult time in the life of our nation, is to become distracted from the task that is at hand. The challenges that we face as a country are many,” Ramaphosa said.

The president was speaking in Cape Town on Thursday during the presentation of the Presidency’s budget vote for the 2022/23 financial year.

After an hour of disruptions, heckling and points of order from Economic Freedom Fighters (EFF) MPs, Ramaphosa was finally allowed to table his office’s budget vote.

EFF MPs refused to be addressed by Ramaphosa following their demand for him to step down while law enforcement agencies carried out investigations into the alleged theft of $4 million (about R61 million) in cash at his game farm in Limpopo in 2020.

Earlier this week, they had warned that they would not allow him to address parliament, saying they would do to him what they had done to his predecessor Jacob Zuma, if he does not step down.

EFF leader Julius Malema, who joined the proceedings in Parliament via parliament’s virtual platform, accused Ramaphosa of being a “money launderer”.

“I want to take this opportunity speaker to announce that we are not going to be listening to a money launderer [and] a murderer of Marikana,” Malema said.

Ramaphosa has come under increasing public pressure to come clean on the robbery at his Phala Phala game farm, after former spy boss Arthur Fraser laid criminal complaints of money laundering, kidnapping and corruption against him.

Ramaphosa has appealed for patience while investigations into the robbery continued, confirming that the alleged stolen foreign currency were proceeds from the sale of game, not criminal activities.

Earlier, National Assembly Speaker Nosiviwe Mapisa-Nqakula refused to entertain points of order from the EFF after she said MPs would be given a chance to raise any issues with the president during the debate on the budget vote.

Also Read: EFF’s ultimatum to Ramaphosa – ‘Step down by Thursday, or we’ll treat you like we did Zuma’

“I have pleaded with you as honourable members [and] as leaders of society that you allow for the president to present his budget vote.

“And if you feel very strongly about raising issues with him, you will have an opportunity this afternoon to raise those issues when you debate the speech,” Mapisa-Nqakula said.

The speaker had also requested the sergeant-at-arms and Parliamentary Protection Services to remove some unruly EFF MPs from the Good Hope Chamber, after they refused to listen to her orders.

Mapisa-Nqakula said their points of order were “frivolous”, adding that MPs’ freedom of speech did not mean that they had a “license” to disrupt the proceedings of Parliament.

“The Constitutional Court found that the privilege of freedom of speech can never go as far as to give members a license to disrupt the proceedings of Parliament, that it may be hamstrung and incapacitate it from conducting its business,” she said.

NOW READ: Ramaphosa took Cabinet into his confidence on robbery at his farm, says Gungubele