'We’re not saying people must be violent. We’re saying they must occupy unoccupied land,' the EFF deputy leader said in Pretoria yesterday. 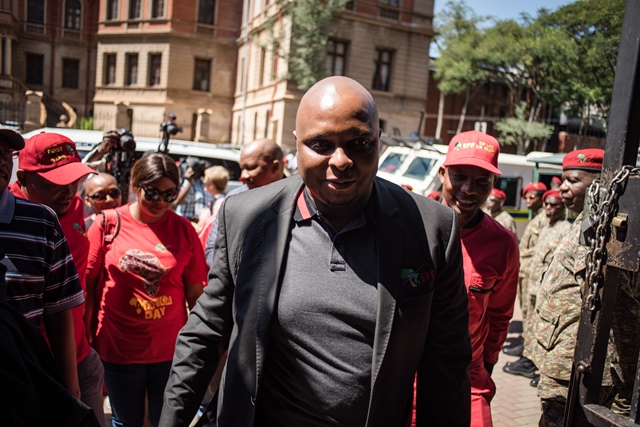 EFF Deputy President Floyd Shivambu is seen arriving at the North Gauteng High Court in Pretoria where EFF leader Julius Malema was expected to appear in a case related to his call on supporters to invade vacant land, 12 December 2018, Pretoria. Picture: Jacques Nelles

Shivambu was reacting to legal argument before the High Court in Pretoria, where judgment was yesterday reserved in the EFF’s bid to have sections of the Riotous Assemblies and Trespassing Acts and the decision to proceed with criminal charges against their leader Julius Malema set aside.

“The call the president (Malema) is being charged for here is saying let us occupy all unoccupied land. We’re not just going to invade people’s homes and productive farms. That’s not the policy position of the EFF.

“We adopted the policy that we should occupy unused land because people cannot continue to stay like pilchards, like pigs in informal settlements where nearby there is vacant land. There’s nothing wrong with that because that’s what’s long overdue in South Africa,” said Shivambu.

“There’s not going to be any violence. If people think that they’re going to respond with violence to people occupying the land then they’re violating the law …

“We’re not even afraid of the possibility of a violent reaction.

“We’re not saying people must be violent. We’re saying they must occupy unoccupied land,” he said.