The DA alleges the president is acting like someone with something to hide. 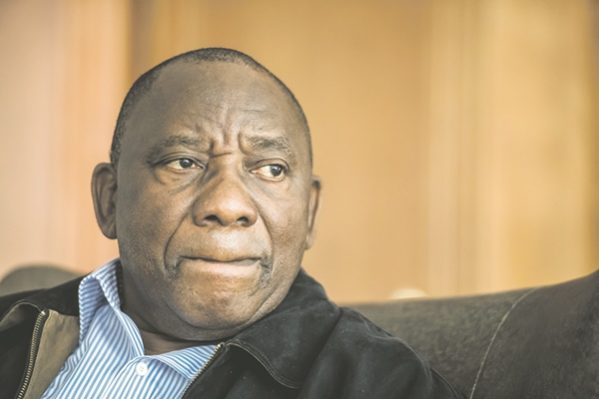 JOHANNESBURG, SOUTH AFRICA – DECEMBER 08, 2017: Deputy President Cyril Ramaphosa during an interview in his home in Hyde Park on December 08, 2017 in Johannesburg, South Africa. Ramaphosa shot down President Jacob Zuma’s proposal to have the loser candidate automatically be made the deputy president with the election only days away. (Photo by Gallo Images / Rapport / Deon Raath)

President Cyril Ramaphosa refused to release the contract between his son and facilities management company Bosasa, which the DA requested in an application lodged in terms of Promotion of Access to Information Act (PAIA).

Sweeping the debate on the state of the nation address (SONA) for the DA, MP Solly Malatsi said DA leader Mmusi Maimane had been informed that the Presidency would not provide the requested information because it did not have it.

“This is not the behaviour of someone with nothing to hide,” Malatsi said.

“Between you, your son and Bosasa, someone got something to hide.”

Challenged to come clean on Bosasa

Malatsi challenged Ramaphosa to come clean on the Bosasa contract when he answers the debate on Thursday.

Ramaphosa last year told the National Assembly, in answer to a question from Maimane, that his son Andile had received money from Bosasa for services rendered in terms of a consultancy contract. Ramaphosa later backtracked in a letter to National Assembly Speaker Baleka Mbete.

He then said the R500,000 payment in question was actually a donation that had been made to his ANC presidential campaign, which he was previously unaware of.

Apart from the DA wanting answers on the Bosasa contract, a common theme in the speeches of opposition MPs was deriding Ramaphosa for not acting against those in the ANC benches accused of corruption.

DA chief whip John Steenhuisen said: “Honourable Mantashe has his hand up, I think he is misleading the House.”

His failure to act against the corruption accused in his party and his links to Bosasa weren’t the only hits Ramaphosa took on Wednesday.

Cope leader Mosiuoa Lekota also claimed that Ramaphosa told apartheid’s special branch that Lekota and his cohorts filled his head with communism, and was rewarded by the special branch for it.

EFF chief whip Floyd Shivambu said a judicial commission of inquiry must be appointed to investigate this claim.

The ANC, however, rallied around Ramaphosa. Minister for Women in the Presidency Bathabile Dlamini said that there were questions about Lekota as well. She said once Lekota asked to be let out of a bus in which activists were travelling. The special branch later stopped the bus and comrades were arrested.

Dlamini was vociferously heckled by the DA for a variety of “smallenyana skeletons” and reacted angrily, diverting from her prepared speech and turning in the podium to look heckler-in-chief Steenhuisen in the eye.

Ramaphosa’s catchphrase in his Sona – “Watch this space” – was also turned against him by opposition speakers.

“While I was watching the space, the lights went out,” said Alan Winde, the DA’s premier candidate for the Western Cape.

Ramaphosa appeared unflappable while he was critiqued or accusations were levelled at him.

After the House adjourned at around 6.45pm, ANC chief whip Jackson Mthembu started chanting over the microphone: “ANC! ANC! ANC!”

Some ANC MPs responded to that with: “VBS! VBS! VBS!”

Steenhuisen vows he'd rather be in opposition than rule with EFF
4 hours ago
4 hours ago
PREMIUM!

Steenhuisen vows he'd rather be in opposition than rule with EFF
4 hours ago
4 hours ago
PREMIUM!