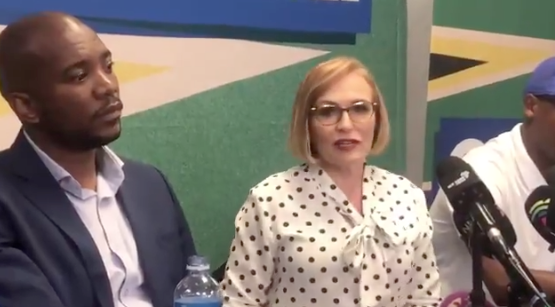 While the DA is yet to give full details on the recommendations it has resolved following the report on the state of the organisation, News24 understands the federal council deliberated over race, the EFF and party leader Mmusi Maimane’s leadership.

News24 has seen the panel review report tabled by former leaders Tony Leon and Ryan Coetzee along with Capitec founder Michiel le Roux before the DA’s federal council, which sat over the weekend in Johannesburg.

“The overwhelming view of those who made submissions or with whom we held discussions is that the party leader, while immensely talented, committed to the cause, hardworking and widely liked, can be indecisive, inconsistent and conflict-averse,” the report read.

It further said that, among others, it led to a lack of clarity on the party’s vision and direction, erosion of unity of purpose and the breakdown of trust between the leader and some of the party’s structures.

While it called for Maimane to consider stepping down, the federal council instead opted for an early conference and a policy conference.

On Sunday, Maimane said he commissioned the review panel to get an honest assessment of the party to modernise itself and prepare for the future.

“I think it’s a sign of confidence when you ask someone to assess you, not a sign of weakness. It says I’m willing to take what you want me to do with it. The mistake you do is to sit back and say nothing. You must carry on as things are going. That doesn’t renew any organisation,” said Maimane during a media briefing shortly after the council meeting had concluded.

Maimane said in terms of the direction of the party a lot of other issues would be fleshed out at its policy conference.

There has been back-and-forth on the direction of the party with some leaders yearning for it to return to its pure liberal values, while others preferred a more progressive liberal approach.

Maimane said the policy conference would enable the DA to give a better policy offer to South Africans of which the results would determine whether he is fit for purpose.

The culture of the party

The panel in its assessment of the organisational culture said it identified behaviours that were hampering the party’s success.

Authoritarianism, destructive behaviour on social media, media leaks and fear of speaking out were some of the issues cited with the panel saying a number of people it contacted sought reassurances that their submissions would be kept strictly confidential.

“Far too many people are afraid of expressing their views for fear of some sort of reprisal. This state of affairs is clearly not healthy in a democratic organisation,” continued the report.

The panel also raised concern on rigid formality and coded aggression, which it said was often attached to hierarchy, position and titles that were out of place in a party like the DA.

In the lead up to the elections, heated debate has often hit social media and numerous leaks found their way to media reports.

“The party has become unable to discuss anything without almost immediately being leaked to the media, often in a purposely distorted fashion,” the report said.

The report also accused some DA leaders of leveraging race, suggesting there is a racial motive on the part of those who disagree or even compete against them.

“There is very significant dissatisfaction inside the party with the way in which incidents and issues had been dealt with. The most significant of these is the incident in Schwiezer-Reineke but others were also frequently mentioned, including the leader’s tweets about Ashwin Willemse and comments about ‘white privilege’,” read the report.

The panel said while the party must stand up against racism, it believed it was “wrong and unhelpful” to take positions on incidents before the full facts were established.

The panel added that the party’s stance should be “clearly thought and through”, properly articulated and presented through sound policies.

The panel also hit out at the DA following its loss of white supporters in the May general elections.

The relentless focus of winning over black supporters was understandable, but taking existing voters for granted was always a mistake, it said.

“It is striking that over a period of many years, the DA failed to heed a number of warnings that it was alienating sections of the white Afrikaans electorate.”