WATCH: Malema accused of running a ‘cult’ as EFF delegates kneel before him

The EFF leader's charismatic speech roused a deep outpouring of emotion among some delegates at the party's conference. 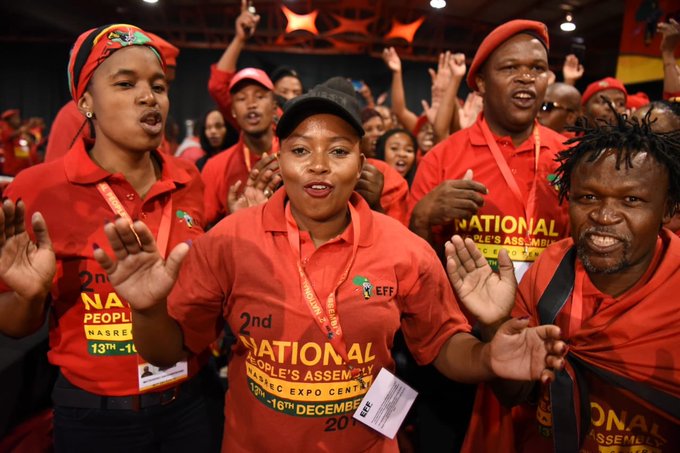 Delegates at the EFF's second elective conference at Nasrec on 14 December. Picture: EFF/Twitter

In clips that emerged shortly after EFF leader Julius Malema gave his keynote address on Saturday at Nasrec in Johannesburg, a large group of voting delegates can be seen spontaneously approaching the stage and kneeling before him while singing a song praising him.

While many interpreted this as a mere expression of loyalty to their leader, along with being moved by his speech, others were less enamoured, seeing in it evidence that Malema is running a personality cult in his party.

ALSO READ: Malema scolds EFF members who bowed before him: ‘I’m not your Papa Bushiri’

Unsurprisingly, he was re-elected unopposed last night, with his deputy, Floyd Shivambu, also cruising to victory against Advocate Dali Mpofu.

Malema coincidentally addressed the issue of personality cults on Saturday, saying the party does not “ascribe to personality cults, hence we distance ourselves from genuine movements that seek to name places after us as individual leaders and activists for economic freedom”.

The hashtag #EFFIsACult started being seen for the first time on Twitter, with commentators seeking further evidence of it beyond just the video clips.

I've said this before I'll say it again the EFF is a cult organization of hooligans owned by Julius Malema this thing called "the peoples assembly" is only made for Malema to cleanse his cult of those whom he deem disloyal to him. https://t.co/KRQCLIBa0t

Take a look at some of the reactions below:

Having watched the EFF top 6 nominations, it's safe to say that organisation is a cult. Straight.

WoW! Followers are beckoned to KNEEL and humiliate themselves before Malema.
…it has really become so low.

What has colour got to do with it. Many white cult leaders have people kneel down to them and suck up to their arse

That’s just so incredibly icky. How is that not a cult? https://t.co/1kKZyQljv4

Cult mentality! I was expecting him to tell them to kill themselves, and they were happily going to do it! #EffIsACult

Kneel and kiss the ring.

None of the other political party leaders in SA make resolutions on behalf of their parties like this man.
He doesn’t even pretend to consult. It’s a cult.

'We don't want to see eNCA at any of our events' – Malema reacts to withdrawing from conferencehttps://t.co/i3lbTMPYfp