'They are all not proper, if they claim they are proper, let's go and do a public health check,' says the EFF leader, who is not a qualified health professional. 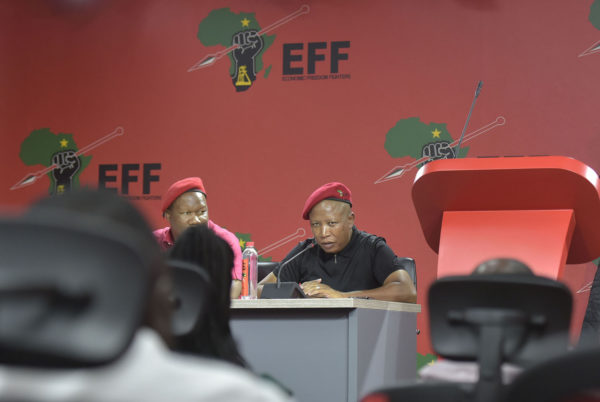 On Tuesday, Malema held a press briefing at the party’s headquarters in Johannesburg to address with issues surrounding coalition negotiations with different political parties when he made the remarks.

“We literally have a sick government because of old age,” said Malema who first singled out Public Enterprises Minister Pravin Gordhan.

“I am not sure guys, and this I am speaking under correction, but it looks like Pravin is sick, and he is unable to perform his responsibility.

“Despite his incapacity as a person, his health is not in good condition. So you have a sick crisis like this with a minister who’s not proper and fit to run such a complex ministry.

“It’s a disservice to a country. Even himself, he is so greedy to the point where he is unable tell the president: ‘release me’.”

“It looks like a similar problem is in finance as well, that’s why the budget took long to be presented.

“It’s not the incapacity of Treasury, we all know how Treasury operates… The man [Godongwana] is not in a very good condition, I suspect.

“The budget, after being presented in Parliament, the committee did not sit to debate the budget. Very unusual… it has never happened.

ALSO READ: Godongwana set to step down from ANC role to focus on Treasury – report

“It’s a problem with old age, even the president does not look good, they are sick. They are all not proper, if they claim they are proper, let’s go and do a public health check. You’ve got a sick government.

“It must be a concern of every South African, we are in trouble,” said Malema.

He announced that his party had since abandoned talks with the ANC to form coalition governments in South Africa’s hung councils.

He explained that the ANC had sought to rush into discussions over positions and power sharing, before discussing the principles and policies raised by the EFF, which has since resulted in the collapse of negotiations.