Zille says their decision has nothing to do with Mashaba, but they're just sticking to what they promised voters. 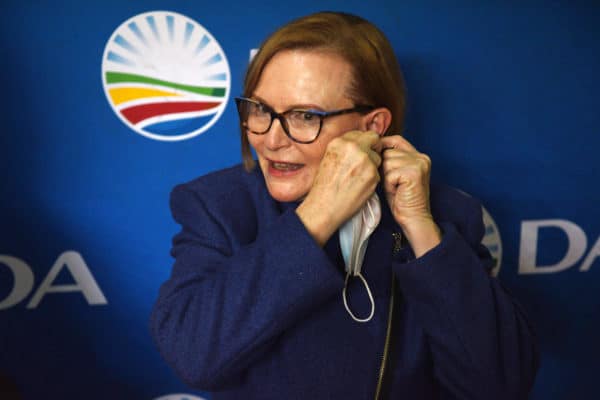 DA federal council chair Helen Zille says there was no double-crossing going on, regarding their decision not to back Herman Mashaba as Johannesburg mayor and instead field their own candidate.

Zille posted a long statement on her Facebook page, disputing Mashaba’s complaint that the DA had insulted the joint collective of political parties that have committed to keep the ANC out of power in the Metro.

This after the DA announced on Saturday that they have no intention of joining the coalition of parties hoping to put Mashaba in charge of Joburg, as this would amount to giving the EFF too much sway over which resolutions are successful in the Joburg City Council.

“Essentially, what we are being asked to do in Johannesburg, is what we did before. We’re being asked to put ActionSA at the head of a minority government that is dependent on the EFF to get 50% plus one of the votes,” John Steenhuisen said on Saturday.

This, he said, would mean the coalition is subject to the whims of the Red Berets, and a mistake the party says they don’t want to repeat, following the chaotic coalitions which followed the 2016 elections.

On Sunday morning Zille also joined the conversation, and responded to Mashaba’s assertion that the anti-ANC collective had been double-crossed by the DA decision.

“The meaning of “double-cross” is to deceive or betray a person with whom one is supposedly working. We have not double-crossed Herman Mashaba,” she wrote.

“And even more importantly, we have not double-crossed the voters. We have merely done what we said we would do throughout the election campaign.”

Zille lists the promises that the DA had made to voters as:

2) We said to voters that, if we lost, we would seek to form coalitions governments of opposition parties that shared the same core values to establish principled, stable majority coalitions that could stay the five-year course.

3) We said we would not repeat the disastrous failures of 2016 in which we sought to govern Tshwane and Johannesburg in a minority coalition that depended on the support of the opposition EFF (from outside the coalition govt) to stay in power. Our experience of this arrangement was that the coalition became beholden to the EFF and betrayed the voters.

Zille maintains that the DA’s Saturday statement is simply a confirmation of these promises and that the party had “never given any other indication or undertaking during the negotiations”.

She said they simply could not repeat the drama which resulted from Mashaba’s previous stint in the mayoral seat, which required EFF support for many of his plans.

“We have been through that movie before, in the difficult (often traumatic) years since 2016. We said we would not repeat it. We have never misled him or given a contrary indication. He has NOT been double-crossed. Nor has anyone else.”

Zille also had a go at UDM leader Bantu Holomisa’s assertion that their reason for not backing the planned coalition is due to their beef with Herman Mashaba.

“Another complete fallacy that must be rebutted is Mr Bantu Holomisa’s claim that I insisted that Herman Mashaba withdraw as the ASA mayor in return for DA support,” Zille wrote.

“This is fanciful fiction. The facts are as follows. During our multi-lateral negotiations on Monday 15th November, Herman Mashaba out of the blue volunteered that if he became a stumbling block, he would be ready to withdraw as the mayoral candidate. As his candidacy was not the issue, I did not even respond to the suggestion and did not think of it again. It just demonstrated to me that ASA and some of the other parties did not understand our principled objection against forming a minority coalition dependent on the EFF to govern.”

She insists that the DA’s position is not about personalities, and thus had nothing to do with Mashaba.

She then continued taking swipes at the EFF, insisting that the Red Berets’ refusal to go into coalitions has nothing to do with principles, but because they want to have control of decision-making processes of local government.

Also Read: ‘The EFF will not enter into any coalitions’ – Malema

“The EFF isn’t interested in the comparatively modest salaries of executive office. They know that people in these positions may not interfere with administrative appointments, nor the awarding of tenders and contracts. They can, however, control all these things if a minority coalition — if those in executive office depend on them to stay in power. Then they can dictate who should fill the positions of Municipal Manager and other key administrative posts — as this is often where the real power lies to dispense patronage and enrich connected networks.”

Zille said the EFF got away with it during the previous Joburg administration and that they hope to repeat this strategy, by having a mayor that is “beholden” to them.