Did EFF outfox DA and ANC in Johannesburg and Ekurhuleni?

The DA finds itself leading minority coalition governments in two metro municipalities, as a result of the EFF's support, while the ANC remains on the sidelines. 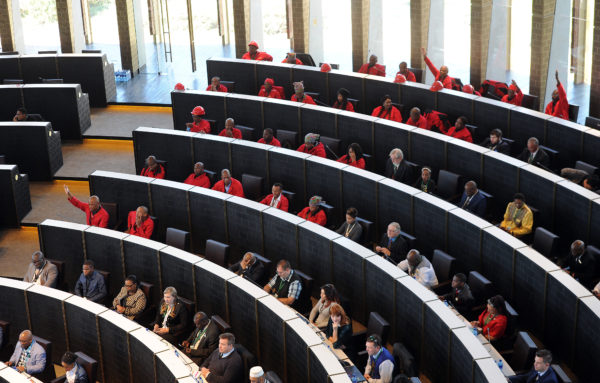 The ANC suffered not one, but two blows on Monday after losing both the Johannesburg and Ekurhuleni metros to the DA.

In the City of Johannesburg, the DA’s candidate Mpho Phalatse was elected as mayor of the metro, while Tania Campbell takes over from outgoing Ekurhuleni mayor Mzwandile Masina.

The DA was backed by the likes of Economic Freedom Fighters (EFF), ActionSA and other smaller parties despite the party’s refusal to work in a coalition minority government.

However, it seems like some people did not anticipate the EFF voting for the DA.

One Twitter user said he would have not voted for the EFF if he knew the Red Berets were gonna support the DA in these hung metros.

Previously, EFF leader Julius Malema said the party would not support the ANC.

During a media briefing last week, Malema accused the ANC of negotiating in bad faith during coalition talks, which abandoning any further negotiations with the ruling party.

The EFF leader said the party would not support ANC candidates in all municipalities for positions including speakers, chief whips and mayors.

He even suggested that Masina and outgoing Johannesburg mayor Mpho Moerane should “pack their bags and go home”.

This was not the first time that the EFF gave its support to the DA to keep the ANC out, although the Red Berets made it clear that it was not going into formal coalitions with the party.

The EFF allowed the DA to take over the metropolitan councils of Nelson Mandela Bay (NMB), Johannesburg and Tshwane following the 2016 local government elections.

The DA now finds itself leading minority coalition governments – ostensibly as a result of the EFF’s support – without any agreements in place, which is a situation the party wanted to avoid.

So the EFF may have played their cards rights to force the DA into this situation while also shunning out the ANC.

While the DA refused to work with the EFF, the party’s leader John Steenhuisen on Tuesday said the Red Berets’ decision to support their candidates “came as a surprise to everyone“.

DA federal council chairperson Helen Zille, meanwhile, said she was not celebrating too much after the results in favour of her party, acknowledging the difficulty they would face working in the coalitions.

Last week, Malema assured that the EFF would not walk out of future municipal council sittings, in an effort to avoid instability and conditions that might lead to the dissolution of municipalities.

The party’s councillors have previously walked out of several council meetings in the City of Tshwane following the collapse of a coalition with the DA.

This led to the metropolitan municipality being placed under administration, but the decision was later overturned by the Pretoria High Court in April 2020.