Stijl, an upmarket beauty salon in Garsfontrein frequented by Afrikaans celebrities and musicians, was vandalised after EFF posters were removed. The Stijl beauty salon in Garsfontein that was vandalised by the EFF after an employee removed the EFF's street pole posters promoting the launch of their manifesto, 21 January 2019, Pretoria. Picture: Jacques Nelles

The Economic Freedom Fighters (EFF) got their own back yesterday after staff at a Pretoria East beauty salon allegedly removed street pole posters promoting the party’s manifesto launch.

The steps and entrance of the salon was left dripping with milk, with ham sandwiches smeared on the windows, and a line of EFF posters stuck on the doors.

Posters of EFF leader Julius Malema have been placed on street poles throughout the capital city ahead of the manifesto launch at the Soshanguve Giant Stadium on February 2.

A staff member of the Stijl beauty salon in Garsfontein was allegedly spotted removing posters from the street pole outside the business on Friday. Stijl is an upmarket beauty salon frequented by Afrikaans celebrities and musicians. The Stijl beauty salon in Garsfontein that was vandalised by the EFF after an employee removed the EFF’s street pole posters promoting the launch of their manifesto, 21 January 2019, Pretoria. Picture: Jacques Nelles

According to a pointsperson operating at an intersection adjacent to the salon, two employees from the business removed the posters just after they were put up on street poles by EFF members.

“On Friday, two EFF members came to put up posters on the street poles. Immediately after, two white ladies walked out of the salon and removed the posters,” said the pointsperson.

According to EFF Johannesburg member Tyrone Mkantsi, who shared an image on Twitter of the posters in the salon’s dustbin, a woman was confronted after an EFF member witnessed her removing the posters. Some of the foodstuffs with which Stijl beauty salon in Garsfontein was vandalised by the EFF, 21 January 2019, Pretoria. Picture: Jacques Nelles

“We saw the lady removing the posters. After removing them, she went to the back with them. We can’t allow such a thing to happen under our watch,” said Mkantsi.

Witnesses told The Citizen that about 12 angry EFF members arrived in bakkies and vandalised the salon.

“They came in bakkies and they started spilling milk all over the place. They threatened to come back to burn the place. The salon wasn’t open for business today as it normally is.”

According to Stijl co-owner ZC Kruger, the posters were removed by a staff member who was renting a work station from the salon. He said they were put back on the street poles on Saturday after the EFF’s intervention. 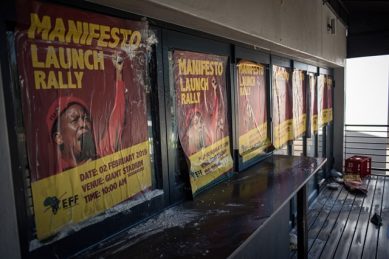 The Stijl beauty salon in Garsfontein that was vandalised by the EFF after an employee removed the EFF’s street pole posters promoting the launch of their manifesto, 21 January 2019, Pretoria. Picture: Jacques Nelles

“The EFF arrived on Saturday but the posters were put back up the same day,” said Kruger.

It is illegal to destroy, remove or deface political party posters.

The EFF reportedly laid charges yesterday against a female co-owner of the salon, who in turn laid charges against the party.