Multiple complaints have been laid by the community in recent weeks in light of the illegal connections, which put people's lives at risk. A woman looks on as tyres burn after protest action descends on Lenasia. Image: Twitter/@crimeairnetwork

Protesters took to the streets in Lenasia on Tuesday morning after illegal connections were removed by City Power, reports Rising Sun Lenasia.

The protest is currently taking place along the Lenasia Drive, one of the main roads leading into the Lenasia CBD, and motorists are advised to use alternative routes.

ALSO READ: Report your illegal connection and get 50% off your fine – Eskom

The protest follows the removal of illegal electricity connections this morning by City Power with the assistance of SAPS and the JMPD.

Lenasia Drive in Extension one has been hit by a scourge of illegal electricity connections, which have intensified in recent months at the local informal settlement.

Local authorities, along with members of City Power, stationed themselves at the affected area to disconnect the illegal connections which posed threats to motorist and passersby. 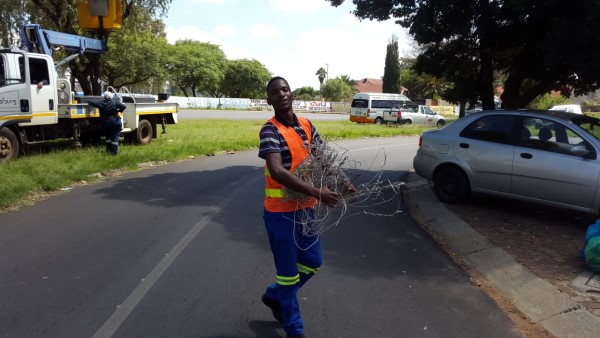 Multiple complaints have been laid by the community in recent weeks in light of the illegal connections, which have affected the daily lives of residents in the surrounding area.