A peculiar scene played out on Monday during protests in Bloemfontein. 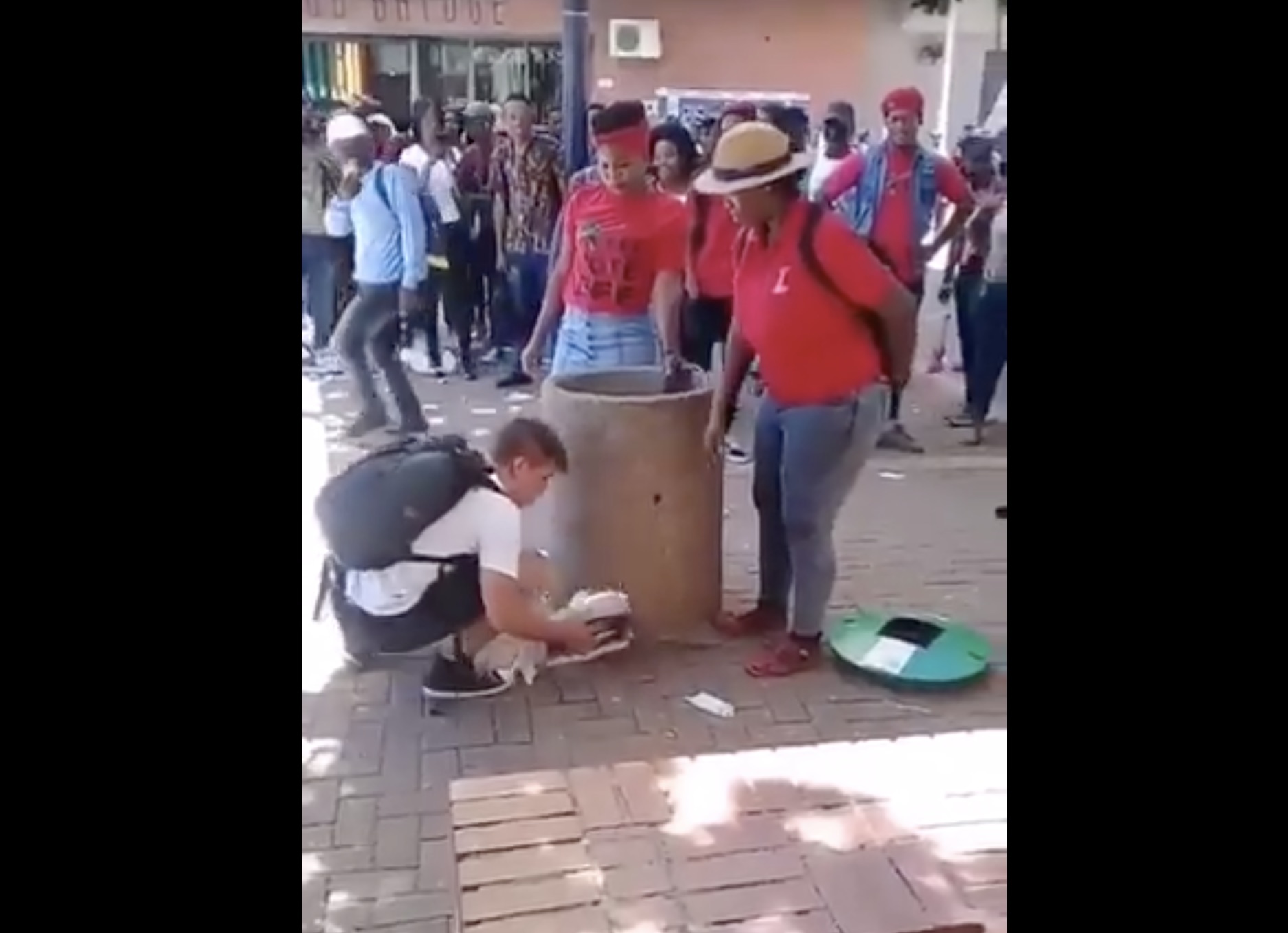 Eckhard Binding picking up litter during a protest on the UFS campus.

Video footage of a scene that played out during a student protest last week at the University of the Free State led by, among others, the EFF, has led many to criticise the party and its members.

In the clip, an apparently singleminded young man, identified as student Eckhard Binding, can be seen picking up litter and putting it in a trash bin, only for two waiting female EFF members to throw it back on the ground, rather mockingly.

The clip only emerged on social media on Monday.

Instead of him just giving up, he seems determined to make his point, so the scene repeats itself numerous times, with Binding simply continuing to pick up litter and attempt unsuccessfully to put it back in the bin. It’s then tossed right back out.

One vocal video blogger, Renaldo Gouws, in response has even go so far as to tell EFF supporters they are “a problem”.

“You are driven by your hate for people because of the colour of their skin. Your leader is a flip flopper and the fact that you can’t see it shows how idiotic you are,” he wrote on Twitter.

Less acerbic criticism of the party and its protest nevertheless wanted to know if it was now EFF policy to trash property during protests, a question that was posed to party spokesman Mbuyiseni Ndlozi.

If you are a member of the EFF or vote for the EFF then you are the problem. You do not care about South Africa. You are driven by your hate for people because of the colour of their skin. Your leader is a flip flopper and the fact that you can't see it shows how idiotic you are. pic.twitter.com/lgIAxJ4IJo

Others said one should not judge an entire protest, or group for that matter, by the actions of a few EFF members alone.

@MbuyiseniNdlozi is this a directive of the EFF to litter? https://t.co/VfgM8kU3JD

If it was a video of two EFF members handing out food parcels, or setting up solar bulbs in rural areas for children to study or maybe even just picking up litter and disposing it properly… and I tweeted “This is why EFF IS the future.” Would you have just said what you said?

One cannot avoid the sneaking suspicion that the EFF's handling of the economy would be as counter-productive as its handling of litter. https://t.co/c1NLtaFEuM

That is not uncalled for this is not acceptable whether it EFF member or not, no one must litter let keep our country clean but please bear in mind not everyone wearing an EFF t-shirt is a member of EFF. Let rather not condone this type of behaviour

Others have pointed out that the video appears to have become an excuse for people to vent their racism.

A disgrace to South Africa and the EFF . They should be given community service cleaning up litter

And these EFF guys think they funny… The @environmentza must change the laws… People who litter should be fined.

Note, 5 March 11:21am: This story was updated to reflect that the protest took place last week and not Monday, as originally reported.

'Paul Kruger Must Fall': EFF calls on DA to remove statue
1 hour ago
1 hour ago

Football must do more than just take knee to combat racism: Lukaku
2 hours ago
2 hours ago

'Paul Kruger Must Fall': EFF calls on DA to remove statue
1 hour ago
1 hour ago

Football must do more than just take knee to combat racism: Lukaku
2 hours ago
2 hours ago