The university has deployed private security reinforcements to patrol and secure all campuses and lecture venues. 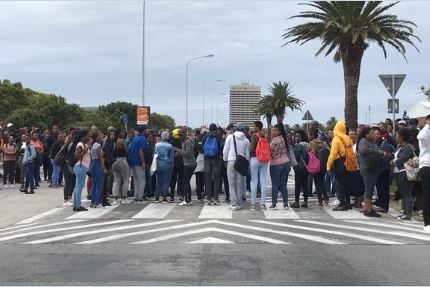 Seven students from Nelson Mandela University in Port Elizabeth have been arrested for allegedly violating a court order which prohibits them from embarking on violent protests in the institution.

The court order was obtained by the university in 2018 to protect the rights and safety of those who wish to access the university to work or pursue their studies, while also allowing for the right to protest in accordance with the conditions set out in the interdict.

On Monday, the university met with student leaders where it said an agreement had been reached regarding student funding and registration.

The university’s media manager, Zandile Mbabela, said a group of students, who were not part of the meeting with the SRC delegation, disrupted classes and intimidated staff and students on the north and south campuses.

“This was in direct violation of the standing interdict which was read out and enforced on Monday. Such acts will not be tolerated and are being dealt with accordingly.

“As of 11:00, seven protesting students have been arrested. Management is committed to follow through with the evidence gathered to ensure the necessary disciplinary action is taken against the apprehended students and those who were disrupting classes,” Mbabela said.

The university has deployed private security reinforcements to patrol and secure all campuses and lecture venues.

“By noon, all roads were cleared and calm restored. The university acknowledges the anxieties among staff and students and is actively pursuing measures to normalise operations.

“… a significant challenge that arises at this time of the year relates to student funding.”

Mbabela said the university was aware of students who were still awaiting funding and have difficulty accessing their financial aid allowances.

“While students may have been approved for funding from the National Student Financial Aid Scheme [Nsfas], there is still a verification process that needs to be carried out before they can be cleared for registration, following which the Nsfas releases allowances.

“As such, the university’s financial aid office is in constant liaison with the Nsfas in a bid to address challenges and bottlenecks experienced by students in this regard,” Mbabela said.

She added as of February 14, 17,036 students have been granted funding statuses, while 11,557 allowances have been paid to Nsfas-funded students.

To date, the university has received 3,577 applications for financial concessions.

“Of these, 3,255 applications have met the financial concessions criteria. There is a verification process currently underway for the 322 unsuccessful applications.

“More than 600 students, who had not applied for the Nsfas within the prescribed deadline for various reasons, were assisted with late applications and have since been granted funding statuses.”

Mbabela said 433 returning students have been assisted with provisional statuses, while awaiting the outcomes of their Nsfas funding appeals.

Police spokesperson Colonel Priscilla Naidu confirmed the arrests, saying four of the suspects were detained on charges of damage to property.

The university remains closed and Public Order Policing officers are monitoring the protests.