The protest caused traffic to be diverted to the N2 freeway for more than 3 hours and remains closed. 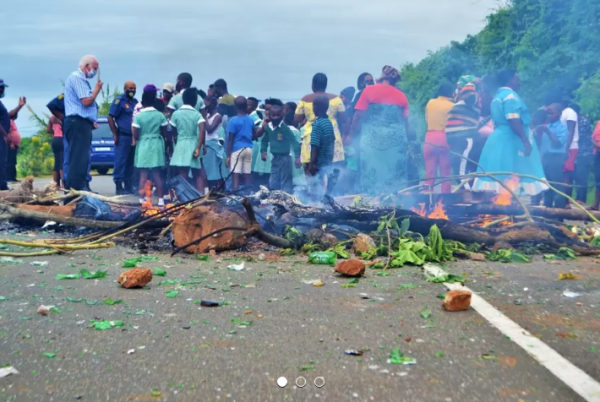 Angry parents blocked the M4 highway between Ballito and Umdloti this morning claiming the local taxi association had prevented their children from using the free scholar transport – a claim they strongly deny.

Isiqalukuhle Taxi Association chairperson, Fanzeni Zondi, said the Tongaat-based association did not have a problem with the buses.

“They have been operating for some time, so why would we have a problem now,” said Zondi.

Parents from the 3 informal settlements along the M4 barricaded the road with rocks and burning tyres at Seatides, calling on eThekwini Metro to intervene.

About 300 children from Thuthukani, Lungelani and Pholani informal settlements were not able to go to school this morning when taxi drivers allegedly stopped buses from taking them to schools in the northern district.

The parents of the affected children told the Courier the taxi bosses wanted their children to use taxis to go to school and forgo the free bus service provided by the education department for children from poor communities.

“The taxi owners want us to pay them to take our children to school. The children are using the free bus to school every morning and the taxi operators are not happy with this arrangement,” a frantic parent told the Courier.

The protest caused traffic to be diverted to the N2 freeway for more than 3 hours and remains closed.

“They are not pleased with the provision of scholar transport in the area,” he said.

This article was republished from North Coast Courier with permission