Gauteng residents wake up to more protests and burning buildings 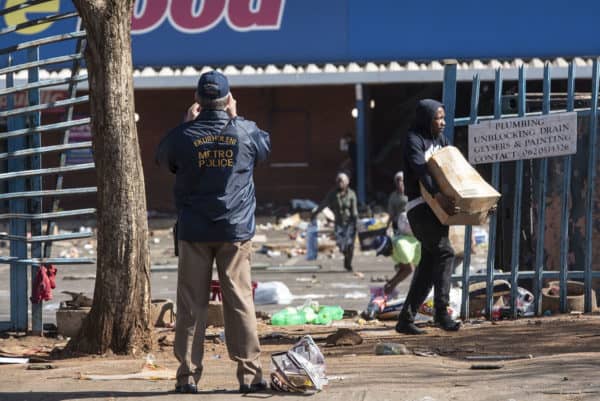 An EMPD officer uses his phone to capture footage while people carry goods as they loot from Cambridge Foods in Vosloorus in Ekurhuleni, 12 July 2021. Several shops are damaged and cars burnt in Johannesburg and surrounding areas following a night of violence. It is unclear if the looting is linked to sporadic protests following the incarceration of former president Jacob Zuma. Picture: Citizen.co.za/Michel Bega

Some residents in Gauteng woke up to the sound of gunshots on Tuesday morning as protests and unrest continue across large parts of the province.

In Mamelodi. Pretoria, a KFC has reportedly been set on fire. The footage can be seen below, however, do note that the authenticity of the video clip could not be established at the time of publishing.

A resident said: “We can’t even sleep, [the] situation in Mamelodi East right now is very bad”. The resident lives “next to the mall [where] they burned KFC”.

According to Yusuf Abramjee, the Mams Mall in Mamelodi was looted, while the Mayfield area in Daveyton “is a no-go”.

He said: “There has been overnight looing and a fast-food outlet [was] also set on fire”.

In addition, Metrorail Gauteng on Tuesday suspended operations. This follows after the service on Monday said it would suspend the train service on 12 July due to the “chaotic scenes in Johannesburg.

“Suspending the train service is not only in Metrorail’s interest but also in the interest of the safety of all its critical assets, loyal customers and employers who deserve a safe and secure operational environment”, Metrorail said in a statement.

As of 6am on Tuesday, the entire N3 Roll Routes had been closed down to all traffic between Cedara in KwaZulu-Natal and Heidelberg in Gauteng in the interest of safety and security.

The protests – originally in support of former President Jacob Zuma – have now morphed into something else altogether.

President Cyril Ramaphosa on Monday evening addressed the nation once again – the second address in 24 hours – and warned that riots and looting will have a devastating impact on South Africa’s already crippled economy.

Apart from essential services being suspended this week in the interest of safety to staff and customers, job losses have skyrocketed as businesses burn and South Africans are forced to stay away from work.

READ MORE HERE: Ramaphosa: We cannot allow this to happen. We have to act