Former sports minister Fikile 'Mbaks' Mbalula testified about a meeting at the Gupta's Saxonwold compound: 'I don't like curry but I had to eat it'. 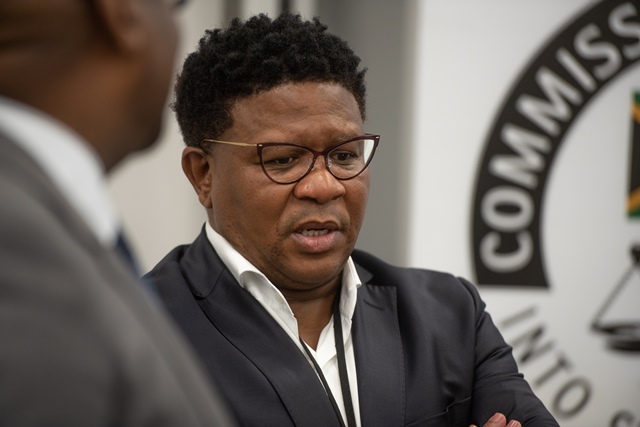 Former minister Fikile Mbalula is pictured at the Commission of Inquiry into State Capture in Parktown, 22 March 2019. Picture: Refilwe Modise

African National Congress (ANC) head of campaigns Fikile Mbalula yesterday described his visit at the Guptas’ Saxonwold compound where he was served “lots of curry”, saying that he stood his ground and would not be manipulated by the controversial family.

Mbalula said the Guptas targeted him after he raised concerns about the Guptas and their far-reaching influence during an ANC national executive committee (NEC) meeting in August 2011. He testified that he had three encounters with Ajay Gupta when he was sports minister — first at their Sahara Computers offices in Midrand, at the Saxonwold compound and at the Wanderers cricket stadium.

“He offered me some curry there [at Saxonwold] before we could talk. I think it’s their culture that before you talk to them, you eat curry. This thing that you see in the public domain that people ate curry there is not a joke. It’s true, you eat curry there…” said Mbalula.

“He [Ajay] then gave me a good lecture about how most of the things I was eating there came from their farm, in Midrand…that everything they eat is not from the shop, it’s produced from their farm. I didn’t even know they got a farm.”

“So you had a vegetarian curry on that day?” evidence leader Leah Gcabashe asked Mbalula.

Mbalula replied: “Yes. I don’t like curry but I had to eat it … more curry, curry, curry. But that curry never finished me. I stood firm.”

In targeting Mbalula, he said the Guptas, through their now defunct newspaper The New Age, reported that he used public funds to pay for now Economic Freedom Fighters’ (EFF) leader Julius Malema’s trip to the Olympic Games in London in 2012. The Press Ombudsman found that the story did not meet the Press Code requirements and instructed the newspaper to apologise to Mbalula.

“I met with Ajay over what I said at the NEC…they were campaigning hard against me. He [Ajay] did not deny anything. I think he probably wanted to say to me ‘you should not have said that’.”

His transcripts with former public protector Thuli Madonsela were scrutinised by Gcabashe, who raised contradictory statements in Mbalula’s account to Madonsela in 2016 and his evidence before the commission.

Mbalula did not tell Madonsela about Ajay’s phone call telling him he will be appointed sports minister.

Commission chairman Deputy Chief Justice Raymond Zondo asked him why he did not disclose Ajay’s conversation to the former public protector.

Mbalula defended his statement, saying he was replying to a question at the time about who appointed him as sports minister, and that the questions did not relate to his comments at the ANC NEC. He said he received a call from Ajay, but the actual appointment was made by former president Jacob Zuma.

“Were you invited to the Gupta family wedding in Sun City in 2013?” Gcabashe asked Mbalula.

He replied: “Yes, I was invited, but I did not attend.”

Gcabashe asked: “Any invites on the other events such as the Diwali festival?”

Mbalula responded saying: “That too. I received invitations but never went.”

Under a further cross-examination grilling by Gcabashe, Mbalula maintained that he was “not a Gupta minister”.

“Ajay Gupta called to congratulate me but he neither offered me a cabinet post nor appointed me,” Mbalula said.

Asked by commission chair Chief Justice Raymond Zondo on what could have been done better in dealing with state capture, Mbalula said: “Had we promptly acted politically, as we should have done, and not dug our heads in the sand, things could have been different.

“We should have confronted the perceptions, which turned out to be reality.

“It helps us to exorcise a difficult cancer of mortgaging state power.”

Mbalula was also quizzed on an affidavit by Ajay Gupta – which forms part of his application to cross-examine Mbalula – in which Gupta denies informing Mbalula about the appointment.

“He put a different version … that what he said was already in the public domain. What do you say about that?” Zondo asked.

Mbalula replied: “I stand by my version. He called me. You can check cellphone records. I can’t remember the exact date, but the record of the call is there.’’

Mbalula also testifed that the 80-member ANC national executive committee (NEC) – the governing party’s highest decision-making body – had all remained silent as an NEC member rubbished concerns by him (Mbalula) during the August 2011 meeting about the negative political impact caused by the meddling of the Gupta family in government affairs.

Mbalula said he received a call from Ajay Gupta in 2010 congratulating him on his impending Cabinet appointment as sports and recreation minister.

“In amazement, I just froze when I received an evening call from Ajay, congratulating me on my imminent appointment as sports and recreation minister.

“The fact that the congratulatory message came from Ajay and not from Jacob Zuma worried me intensely,” said Mbalula.

Months later, he decided to break his silence before his comrades at the NEC meeting, hoping there could be an intervention to stop the Gupta influence.

“The issue of the Gupta influence on ANC leaders – particularly their closeness to former president Zuma – was in the public domain,” he said. “I exploded in telling the NEC of the dangers of the Guptas calling ministers.

“I told comrades about the problem of the family having so much power that not even a branch member of the ANC enjoyed. I said we needed to deal with the issue head on.

“I found my comrades to be cowards who failed to express their opinions about the Guptas – a big elephant in the room. Nobody stood up and spoke about the political ramifications of the Guptas.”

He said the NEC reaction from his comrades was “concerning”.

“Most of them bowed their heads down, saying nothing,” he said. “It became quiet and tense that you could hear something dropping.

“People were shrinking in fear, with one giving me a pat on the back for being brave.

“Nobody supported me, not even Trevor Manuel when one NEC member stood up to rubbish what I had said, pointing out that the NEC meeting was ‘not a beer hall’ to raise issues about the president.”

The hearings continue on Monday.