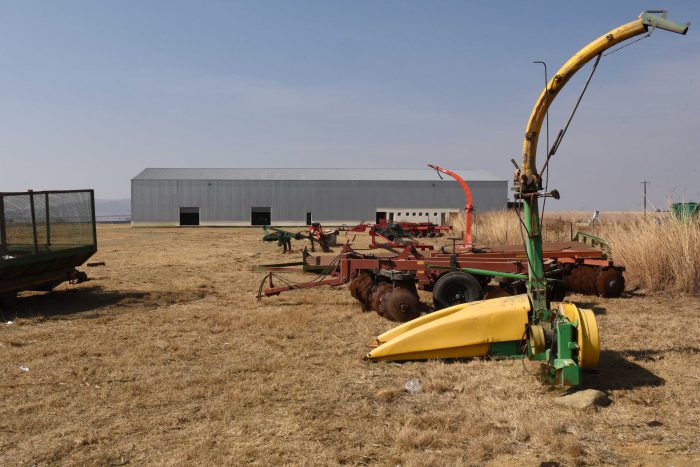 Farm equipment during a site visit by the leader of the DA, Mmusi Maimane, to the Vrede Dairy Farm that was run by Gupta company Estina, 12 July 2017. It was intended to benefit the community but has been alleged to be a front for money laundering and also alleged to have been the source of funds for a Gupta wedding, 12 July 2017. Picture: Neil McCartney

The Mohuma Mobung initiative was the brainchild of the Free State department of agriculture’s former head who discussed the idea with, among others, former agriculture and rural development MEC Mosebenzi Zwane.

The initiative was the first point of discussion on Thursday at the Zondo Commission of Inquiry into State Capture when former department head Peter Thabethe took the stand.

This, as well as general supply chain management issues within the department, were also brought up.

Mohuma Mobung was an initiative to strengthen agricultural development in the Free State through investment. However, it is alleged that millions of rand were diverted from this initiative to Estina.

Thabethe explained a dairy farm initiative had already existed in the department before he arrived, however, funding was a problem. As such, the infamous Mohuma Mobung initiative was created to develop a clear funding plan.

The commission then moved onto a more general matter – the department’s supply chain management policy.

In terms of this policy, there were instances when deviations from normal procurement regulations can occur, however, this would only be in times of emergencies or urgent matters (for example, natural disasters).

The commission traversed this supply chain management policy with Thabethe who seemed hesitant to apply the policy to the Estina dairy project.

However, none of this has been linked to the project and possible procurement irregularities in that regard.

Thabethe was cautious in his assertion that the policy would have a different interpretation regarding Estina.

The policy in question is one that allows for a deviation from normal bidding procedures, which generally calls for advertising and competitive bidding processes. The deviation overrides this in urgent cases or cases of emergency.

Advocate Leah Gcabashe, leading evidence for the commission, said this could open doors for manipulation and the head of department (HOD) could become both player and referee.

By this she meant that, in cases such as these, the HOD could both request a deviation from procurement protocol and sign off on it.

However, Thabethe said this would have been discussed extensively by the department beforehand, but conceded that it could be a difficulty the department could face and could lead to irregular expenditure if documentation was not acquired.

Thabethe was among eight people who were arrested in connection with the alleged theft of R250 million linked to the farm project. Charges were withdrawn against the group in November last year, News24 reported then.