Despite his leadership role in the project, Peter Thabethe seemingly had little idea of what was happening on the farm. 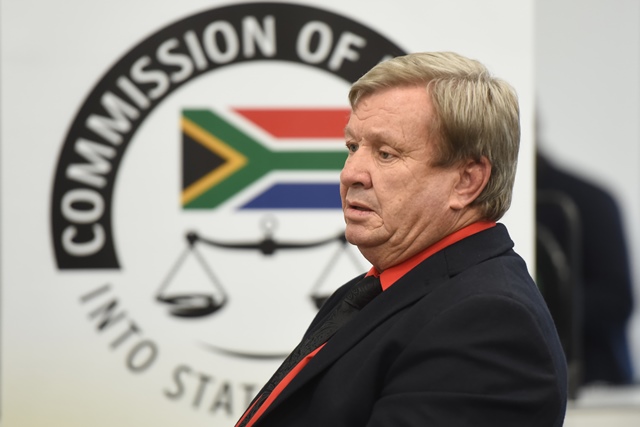 Vrede businessman Willie Basson is pictured at the Commission of Inquiry into State Capture in Johannesburg, 26 July 2019. Picture: Refilwe Modise

It is unclear what expertise Indian dairy producer Paras brought to the Vrede dairy project.

Testifying at the state capture commission, the former head of the Free State department of agriculture, Peter Thabethe, said he was not sure what exactly the company had brought with them from India.

“There was a stage when they indicated that there was a vet on site, but I am not really sure exactly what expertise overall,” Thabethe told the commission.

He added: “I think Dr [Tskisi] Mastieng would have maybe known exactly what expertise was on site.”

This is despite Thabethe’s previous testimony that the department had brought Paras on board because they possessed the required expertise which the project needed in dairy production.

Commission head Deputy Chief Justice Raymond Zondo was quick to point this out.

He added: “At a certain stage I would have thought that you would want to go inspect and see how everything was like, and see that everything was as contemplated in the plan…”

Zondo said this was something deserving of a head of department’s attention who had placed himself as one of the project leaders.

Previous evidence from Vrede businessman Willie Basson indicated he was unhappy with what Paras had to offer.

Basson said he was disappointed with the three Indian nationals who had not brought any equipment with them to do their job.

He added the quality of the materials brought from India were second hand, of bad quality and rusted.

Thabethe, however, said he had not heard anything about substandard materials.

“Myself personally, I did not go verify each and every stage when people were coming to say, ‘is it indeed the people we expected that were coming’.

“Maybe because I had confidence in the team I was working with, because I understood that if there was any problem [they would say so],” Thabethe explained.

Despite his leadership role in the project, Thabethe seemingly had little idea of what was happening on the farm.

When the Free State development corporation took over as implementing agent from Estina, the commission heard, there was still little due diligence done beforehand, and afterwards, little oversight over its work.

Thabethe, however, maintained this was untrue because they were provided with reports from the implementing agent, which would then be used for verification purposes.