The witness says he thought the R300k in cash he gave to a former SA Express official was for the purchase of a car. 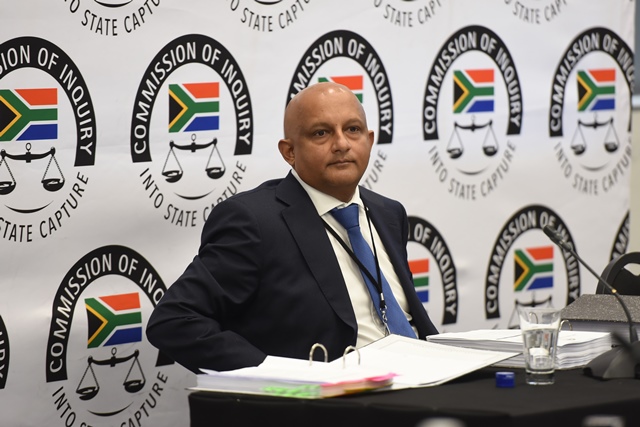 Director of Neo Solutions Vivien Natasen is pictured at the COmmission of Inquiry into State Capture in Johannesburg, 12 July 2019. Picture: Refilwe Modise

The director of Neo Solutions, Vivien Natasen, on Thursday told the commission of inquiry into state capture that there was nothing untoward with the R300,000 cash he had given to a former SA Express (SAX) commercial manager Brian van Wyk.

The commission heard that on January 4, 2016, Van Wyk had asked Natasen for the money so that he could purchase a vintage vehicle.

Evidence leader at the commission, senior counsel Kate Hofmeyr, asked Natasen whether Van Wyk had made mention of an ANC celebration and a need for cash in relation to that, to which the witness responded in the negative.

“Did he make any reference to reflector jackets that were required for those celebrations and in respect of that he needed to pay R300,000?” Hofmeyr asked.

Natasen responded: “Definitely not to me.”

During re-cross-examination by his legal representative, Natasen maintained that he took Van Wyk’s word that he would use the money to purchase a vehicle, and that at the time it did not matter to him what Van Wyk would use the money for because “he was a friend as well”.

Natasen added that because he had the money at hand he gave it to Van Wyk and he saw nothing wrong with it, because van Wyk was still owed some money by Neo Solutions.

Giving testimony at the commission during his first appearance, Natasen said Van Wyk had requested that Neo Solutions hold R9.9 million for him, which the witness said he understood would be used in a farming venture the two would go into at a later stage.

At the instruction of Van Wyk the R9.9 million was transferred back to him between November 2015 and March 2016.

Earlier on Thursday, Hofmeyr asked Natasen: “Would it surprise you to learn that he made no purchase of any vintage car around that period?”

Natasen responded: “I can’t speculate,” further responding that given what he knows now he is not surprised that Van Wyk had not purchased the vintage vehicle.

The witness added that he could not speculate on whether Van Wyk had asked for the money to make use of it in a different way.