The witness at the Zondo commission says these include banks, corporates, professionals, and foreign governments. 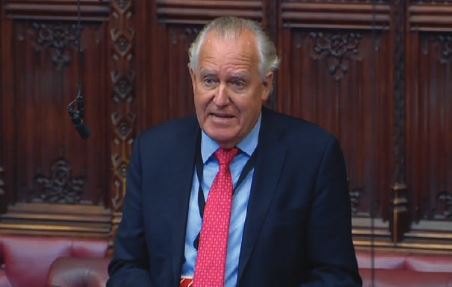 House of Lords peer and anti-apartheid activist Peter Hain on Monday gave testimony at the commission of inquiry into state capture on how state capture was allegedly facilitated by massive international financial institutions, corporates, and foreign governments.

Evidence leader at the commission advocate Paul Pretorius said Lord Hain’s evidence relied largely on information that was in the public domain, however, as a precautionary measure, notices were sent to parties implicated in his evidence.

Lord Hain said these “international actors” had played a role in the state capture project that unfolded at the South African Revenue Services (Sars), the National Prosecuting Authority (NPA), the Hawks and other state-owned enterprises which were looted principally during Jacob Zuma’s presidency and largely by the former president’s associates, the Gupta family.

“This amounted in a complete picture of state capture,” Hain told the chairperson of the commission, Deputy Chief Justice Raymond Zondo.

Lord Hain told Zondo that in developing countries such as South Africa, financial crimes such as those committed during the state capture project kept citizens in abject poverty and worsened inequality.

“It is actually robbing people of their national wealth,” Hain said.

He said action and cooperation at a global scale were needed to deal with such crimes to ensure state capture did not happen again and was prevented from taking hold in other countries.

Lord Hain said his plea was for the international community to acknowledge its own role in state capture.

Banks such as HSBC, Standard and Chartered and the Bank of Baroda had assisted in the movement of funds undetected, Hain said, citing the failed Vrede dairy farm project in the Free State which was meant to be implemented by Gupta-linked Estina as an example of how government funds injected into the project were moved out of South Africa.

“They have granted them an open door to their international network,” Lord Hain said.

He said banks should have spotted the red flags in certain transactions and reported these to regulatory and law enforcement authorities.

Lord Hain further blasted the statement that banks did not have access to client information in branches in other countries.

He said professionals such as lawyers, auditors, accountants, and estate agents assisted in creating complex corporate structures to hide these illicitly gained funds.

Foreign governments had also had a hand in providing refuge to individuals at the centre of state capture.

After the tea adjournment, Hain said the commission should establish why the Guptas had not been extradited from Dubai now that the two countries now had an extradition agreement in place.

Ahead of the tea break, Lord Hain told Zondo that for corruption to take root, “it takes two to tango”, which meant politicians on the one hand and corporates on the other conniving to make this possible.